Zeldapedia
Register
Don't have an account?
Sign In
Advertisement
in: Articles with non-canonical information, Beta, The Legend of Zelda: A Link to the Past items,
and 7 more

"You found the Fire Rod! This rod commands the red fire! But watch your Magic Meter!"
— In-game description

The Fire Rod is a recurring item found in the Legend of Zelda series. This rod shoots a blast of fire whenever Link waves it, allowing him to ignite objects and enemies, as well as lighting torches. It is similar to the Lantern in function, but it has longer range.

The Fire Rod is found in Skull Woods, where it is needed to enter the second part of the dungeon. It is helpful, though not essential, in defeating Mothula and Kholdstare. It is later needed to defeat Trinexx, the boss of Turtle Rock. It requires Magic Power to use. The Fire Rod can defeat most enemies in one hit, setting them on fire as it does so.

Fire Rods can be found on Item Podiums. It shoots a fireball when the A button is pressed, or a continuous stream of fire when the A button is held, during which Link can continue to move while facing the same direction. If Link meets a Great Fairy, she will upgrade his Fire Rod to Level 2, allowing Link to place a yellow block on the ground when he swings the rod. If Link swings the Fire Rod again, the block will explode, sending out fireballs in the four cardinal directions. Additionally, the Level 2 Fire Rod can be used to create moving platforms in certain areas. The effect of the Level 2 Fire Rod is similar to that of the Cane of Somaria.

"You got the Fire Rod! This mystical rod shoots forth mighty flames."
— In-game description

Although it does not appear in-game, the Fire Rod shows up in the text of the game several times. It is seen with a price tag of 350 Rupees, and also has a game script of Link obtaining it. In the final version of the game, the Ice Wizzrobe Figurine mentions the Fire Rod, suggesting it was an item that was removed from the game late in development, possibly obtained instead of or as an upgrade to the Flame Lantern, which is found in the Temple of Droplets.

The Fire Rod appears as an item in the game. It can be bought or rented at Ravio's Shop. If Link brings ten Lost Maiamais to Mother Maiamai, she can upgrade the Fire Rod into the Nice Fire Rod. Rather than shooting a fireball, it creates a column of fire capable of damaging enemies and melting ice.

"A magical rod that can cast fireballs, said to have been created by an ancient magician. The rod will break if it strikes something directly, so use it wisely."
— Hyrule Compendium

It appears as a weapon, however unlike past depictions it is fragile after a few direct hits or when the magic runs out, since each fireball thrown reduces durability, less than a direct hit on an enemy or object. Like most magical elemental rods, it breaks when its magic is used up though this only applies to Link as weapons do not break when wielded by enemies (save for wooden weapons and shields that burn up). A Fire Rod can be wielded by a Fire Wizzrobe and Link can obtain it after defeating this enemy. Link can also find Fire Rods in the Thyphlo Ruins where they are useful for lighting up the pitch-black ruins and torches. In the northeastern part of Meadela's Mantle in the Gerudo Highlands region a Black Bokoblin wields one making it one of two rods wielded by non-Wizzrobe archetypes outside of enemies picking up dropped rods. Interestingly, a Blue Bokoblin in Crenel Hills wields the stronger Meteor Rod normally wielded by Meteo Wizzrobes showing Bokoblins have an affinity for fire-based rod.

Three Fire Rods spawn within the Thyphlo Ruins which will occasionally respawn when Link returns to the area. Fire Rods can produce a single fireball with each attack up to four times before it needs to recharge. If Link preforms a Spin Attack while wielding it, he will cast five fireballs in a pattern which interestingly resembles the kanji 火 (fire, 火?). Like all Rods, Fire Rods cannot be thrown and instead will cast a single fireball.

During the side quest "The Weapon Connoisseur", it is the second weapon required by Nebb. Link can take its picture with the Camera Rune to add it to the Hyrule Compendium where it appears as entry number 233 in the Compendium's Equipment section. It can be commonly found in the Gerudo Highlands and Great Hyrule Forest regions according to its entry's common locations section in the Hyrule Compendium.

The Fire Rod appears as Link's Level 1 Magic Rod; however, unlike past depictions, it is much more powerful and is capable of attacking enemies over a wide area. It can even summon a serpentine dragon made of fire. It is obtained in The Sheikah Tribesman story scenario, inside the Eldin Caves.

The Legend of Zelda: The Minish Cap beta

Originally, the Fire Rod was going to appear in The Minish Cap, though the concept was later scrapped. The Fire Rod can still be found within the game's code. 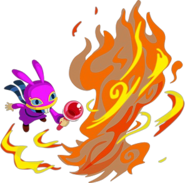 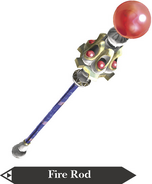 The Fire Rod in Hyrule Warriors 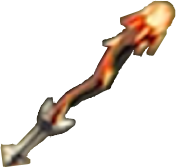 The Fire Rod from The Legend of Zelda: Breath of the Wild
Community content is available under CC-BY-SA unless otherwise noted.
Advertisement