Freshly-Picked Tingle's Rosy Rupeeland (もぎたてチンクルのばら色ルッピーランド, Mogitate Chinkuru no Barairo Ruppīrando?, literally, Freshly-Picked Tingle's Rose-Colored Rupee Land) is an action-adventure video game developed by Vanpool and published by Nintendo for the Nintendo DS. It was first released in Japan on September 2, 2006, and was released in Europe on September 14, 2007, a year after its Japanese release. A North American version was never released. This was most likely due to a poll done by Nintendo. Contrary to other games in the Legend of Zelda series, instead of Link being the main character, players take control of Tingle. It is debated on whether or not the game is cannon, but it is confirmed not to be.

The game's plot follows Tingle's transformation from a rather ordinary middle-aged man into his green-clothed fairy persona. Such a story starts when one day a voice calls Tingle from his home to a spring west of his house. Here, Uncle Rupee, an old man with a Rupee-shaped head, appears and offers Tingle a life in a paradise called Rupeeland if he continues to throw Rupees into the western pool. If enough Rupees are fed, the Tower found under the pool will grow upwards towards the sky, and Tingle will be able to enter Rupeeland. Tingle accepts the offer and Uncle Rupee transforms him so that Rupees become his source of life. However, at the end of the game, the player learns that Uncle Rupee has been deceiving Tingle all along and that Rupeeland is a horrible place, causing Tingle to battle against him.

Freshly-Picked Tingle's Rosy Rupeeland features eleven islands divided into three continents. Each island is themed differently and usually contains its own dungeon or has a central puzzle the player must complete.

The object of Tingle's Rosy Rupeeland is to continually build up a tower found under a spring to the west of Tingle's house. To do this, the player must feed Rupees into the tower. Subsequent gameplay is built upon finding as much money as possible but also mixed with traditional Zelda dungeon adventuring and puzzle elements. Among this, however, is a deep bargaining system for interacting with NPCs, as items and information must be bought via offering what the player thinks is a suitable price. If the price is too low, the player may not receive anything, but if the price offered is too high they may be needlessly spending too much. Nonetheless, finding and collecting money remains the core goal of Tingle's Rosy Rupeeland, and there are many ways to achieve this.

Dungeons within Tingle's Rosy Rupeeland are found on each of the game's three continents, and are a necessity to complete the game. By completing a dungeon, not only does the player receive what are typically the biggest Rupee rewards, but by defeating the end-of-dungeon bosses they also receive one of five gems. Even if the player has successfully built the tower to its tallest height, they must have collected all the gems to access the final location.

Accessing these dungeons is limited by the height of the tower, as certain areas can only be accessed once the tower is a certain height, and thus after the player has donated enough Rupees into it.

Although completing dungeons can be likened to that in The Legend of Zelda series, combat is very different to the combat elements of such a series. Instead of having a large amount of direct input into the battles, within Tingle's Rosy Rupeeland the player simply engages an enemy, at which point both Tingle and the enemy character turn into a ball of dust as they fight. Then the player can either tap the screen to rally support for Tingle or use the D-pad to move the fight around the screen.

Although Tingle's Rupee count depletes as he fights with an enemy, successfully defeating one results in receiving Rupees and rare items. By engaging multiple enemies in battles, by moving the dust cloud over them, although Tingle loses more Rupees early on in the battle, the number of rewards multiply.

Furthermore, to assist Tingle in battles, the player can acquire bodyguards as support characters to help him in combat and dungeons. These bodyguards are found in "Bodyguard Salons", and there are thirty of these characters overall, who must be bargained with for them to help. These characters come in small, medium and large sizes, such description reflecting their strength and power parameters.

Tingle can collect items along his journey, selling them later for profit or using them to aid support characters or other NPCs. Items can also be mixed together to create different variations. These are made via the boiling pot in Tingle's home, where the player uses the stylus to stir the mixture. Other items can be used to decorate the top floor of Tingle's house, and completing the game allows the player to change Tingle's clothing.

Whenever the player enters a new location within Tingle's Rosy Rupeeland, the player will receive an incomplete map. By filling in and completing the map, via circling (with the stylus) points of interest which are not shown on it, the player can then show the map to an old woman in the nearby port town and receive a fixed sum of money. By completing the map, however, the player loses access to the map until they buy it back from the woman.

Following several articles and import reviews in various international monthly publications, like Electronic Gaming Monthly and Nintendo Power, Official Nintendo Magazine, the official Nintendo magazine in the United Kingdom, reviewed the title under the name of Freshly-Picked Tingle's Rosy Rupeeland in its March 2007 issue, stating a release of the game that month.[1]

In early January 2007, website Cubed³ reported that Nintendo had confirmed to them a European release for 2007,[2] but it was not until June 21, 2007, that Nintendo officially announced that the game would be released in European countries under the same title used by Official Nintendo Magazine.[3]

Freshly-Picked Tingle's Rosy Rupeeland has received mostly positive reviews from the few outlets which have reviewed it. Official Nintendo Magazine gave the game a score of 76%, praising the game's uniqueness, humour and "fantastically stylised graphics", but criticizing it for dull dungeon design and a poor battle system.[1] When the review was reposted on the magazine's website upon the game's European release, however, the score was changed to 72%.[4] gamesTM gave it a score of 60%,[5] whilst NGamer gave the Japanese version a score of 69%,[6] and the English version a score of 75%.[5] 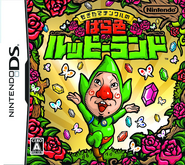 Box art for the Japanese release 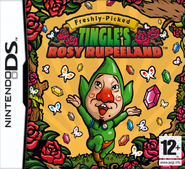 Box art for the European release