Zeldapedia
Register
Don't have an account?
Sign In
Advertisement
in: The Legend of Zelda: Four Swords Adventures bosses

Frostare (こおり, Koori?) is a boss from The Legend of Zelda: Four Swords Adventures. It is the final boss of the Tower of Winds, and consequently, Frozen Hyrule, the game's seventh level. Frostare hangs from the ceiling and is an an eye encased in ice, hence its name. While attached to the ceiling, Frostare's only attack is to spawn Larvae. They can easily be dispatched with the Four Sword or Fire Rod. Frostare is very similar in appearance to Kholdstare, a boss from The Legend of Zelda: A Link to the Past.

When the battle begins, Frostare spawns Larvae to defend it. Any attacks made directly to Frostare will be deflected; as a Sword Beam or fireball nears the eye, it closes, and the ice blocks the attack. In order to damage Frostare, Link must first obtain the Roc's Feather from one of the rooms to the right. The top room on the opposite side of the room contains Frostare's root, which fastens it to the ceiling.

Once it has been cut, Frostare will fly around the room. At this point it will cease to produce Larvae. By using the Roc's Feather to attack Frostare in mid-air or using the Fire Rod to hit its eye, Link will knock it down to the floor. This gives him the opportunity to attack the eye repeatedly with the Four Sword. After enough damage has been dealt, Frostare explodes and the battle ends.

After stepping into the light in the following level, Link can break the Vaati Barriers and release Princess Zelda 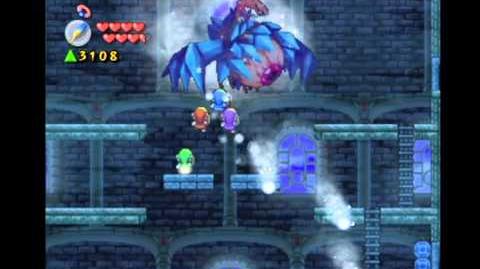 The name Frostare is a portmanteau of the words frost, referring to the ice protecting the boss, and stare, which is a reference to the eye.