"We have a treasure that was entrusted to us by the spirits, and we must protect it. Do you understand? But the moment Darbus reached out and touched the treasure...everything went wrong. He collapsed...and before our very eyes transformed into an unspeakable monster! He began to rage through the mines, trailing ruin behind him...and the eruptions grew more frequent and more severe. We used all of our strength to seal him deep inside the mountain... It...grieved us to do this to our patriarch...but we had no other course of action."
— Gor Coron

Twilit Igniter, Fyrus (覚醒火炎獣 マグドフレイモス, Kakusei Kaenjū Magudofureimosu?, Awakening Flame Beast Magdoflamoth) is the boss of the Goron Mines, the second dungeon in The Legend of Zelda: Twilight Princess. Fyrus is the only boss in Twilight Princess whose battle has only one phase.

Shortly before Link arrived at Death Mountain, a group of Gorons, led by their tribe's patriarch, Darbus, ventured into their mines to investigate a recent influx of enemies. There, they came across one of the Fused Shadows, and when Darbus touched it, its dark power corrupted his mind (The Light Spirit Faron had previously warned Link that the Fused Shadow should never be touched by those who dwell in the light). He took on a strange and menacing new physical form and became violent, forcing the other Gorons to chain him up and lock him away deep in the mines.

When Link arrives at the entrance to the mines and beats one of the Goron Elders, Gor Coron, in a sumo wrestling match, the Gorons recognize his strength and ask him to enter the mine complex and free Darbus from his possession. Link successfully completes this task, and retrieves the second Fused Shadow for Midna. Despite their gratitude, the Goron Elders are unwilling to inform Darbus, who suffers from memory loss from his ordeal, that he had been saved by a mere Hylian, as that may greatly upset the proud Goron. Later on in the story, Darbus unknowingly repays his debt towards Link by using his superior strength to open the way to the Hidden Village, which has been blocked by chunks of rock. He also tells him about the group of Bulblins that have infested the village, along with giving him a tip on defeating them.

When Link acquires all three of the Key Shards from the three Goron Elders inside the Goron Mines, he assembles the boss key and enters the area where Fyrus is being held. He emerges in an eerie bluish-green chamber, upon which the door, as usual, locks behind him. Standing in the middle of the room is a massive black monster with his arms and legs chained to the ceiling and floor, respectively. As Link approaches the beast, a crystal on his forehead begins to glow and he awakens. Roaring menacingly at Link, Fyrus notices the chains clamped to his wrists. Before Link's eyes, Fyrus violently sets his body ablaze (tearing the chains attached to his legs off the floor) and he rips his chains off the ceiling. He then roars at Link again and promptly attacks him in a murderous rampage. If Link touches Fyrus' body while it is still ablaze, he will take damage. Fyrus' main attack is whipping at Link with his now broken chains, breathing fire at Link, and he also summons a wall of fire.

In order to defeat Fyrus, Link must first shoot the crystal embedded in his forehead with the Hero's Bow before running around to the back of him and grabbing one of the chains on his feet. By wearing the Iron Boots and tugging on these chains, Link can make Fyrus topple over and fall to the ground, allowing him to further attack Fyrus' weak point, the crystal, with his sword. Alternatively, Link can simply shoot the crystal repeatedly until the boss falls down. Whilst any attack will do damage, Jump Attacks seem to weaken him more. After repeating this several times (optionally finishing him with the Ending Blow), Fyrus rises once again, howling in pain. As he thrashes around in agony, the room brightens as he lets out one final roar before the crystal explodes, releasing a Heart Container. The beast then explodes into the second Fused Shadow. Free of the dark relic's vile influence, Darbus, initially still covered in black, collapses to the floor. 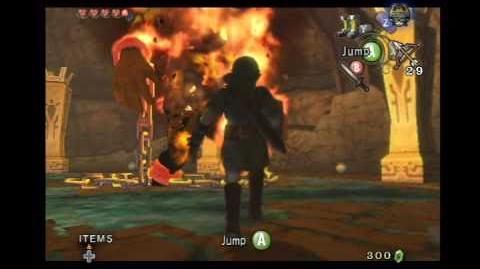 Fyrus was first shown in the original trailer for Twilight Princess at E3 2004. Fyrus' physical appearance is similar to his design in the final build of the game; however, there are some differences. In the trailer, Fyrus lacks the mask or jewel seen in the final version. His wall of fire attack appears to be slightly faster. The room in which he is fought is virtually unchanged; however, upon closer inspection, the metal floor tiles are missing. Link can also be seen jump attacking him at the end of the trailer, suggesting he was originally meant to be fought in a different manner than the one presented in the game. As the trailer changes focus before the attack can deal any damage, the jump attack could have been shown just for dramatic purposes.

The name "Fyrus" is likely a portmanteau of the word "fire" and the creature's original self, Darbus. The name also sounds similar to the word "virus", playing on Darbus being infected by a Fused Shadow and turning into a monster.