This article is about the Game & Watch game. For the multi-purpose wristwatch by Nelsonic, see The Legend of Zelda Game Watch.

Game & Watch: Zelda (serial number ZL-65) is a handheld LCD game developed by Gunpei Yokoi and Nintendo R&D1 and released in August 1989 in North America, as part of Nintendo's Game & Watch Multi Screen series. It is the first handheld Zelda title, coming out four years before The Legend of Zelda: Link's Awakening. Similar to other Multi Screen games, it has two screens with a hinge in the center and the buttons on the bottom half, making it look strikingly similar to the Nintendo DS. It is a side-scrolling action game, and the gameplay and items are inspired by Zelda II: The Adventure of Link.

Players control Link and fight through labyrinth chambers on the Game & Watch's lower screen. In the labyrinth chambers, Link faces Poe-like Ghosts, up to four Stalfos, and a Moblin-like Goblin mini-boss. Stalfos and Ghosts cannot be defeated and must be dodged and blocked with the shield respectively. The Goblin must be killed in order to complete the lower-screen labyrinth.

Once the labyrinth is complete, stairs appear and the action shifts to the Dragon's Lair in the upper screen. Here Link battles a dragon on the right hand side of the screen while avoiding its fire and tail attacks. The left hand side of the screen displays the dungeon map and items such as the Tomahawk item—unique to this game—that Link gains while fighting the dragon. Upon defeating the dragon, the game starts again in the next labyrinth with quicker enemies and retains the player's high score. This Game & Watch game also features a continue button that allows players to continue the game in the event of a Game Over. 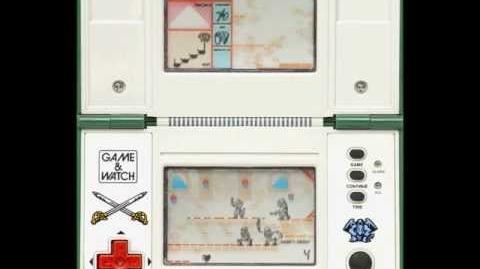 Like the original The Legend of Zelda, Game & Watch: Zelda has a Second Quest. After the ending scene, if the player presses the attack button the Second Quest will start. The Second Quest has quicker enemies and the player's score from the previous game is carried over.

Eight fierce dragons are creating havoc and fighting with mankind with the aim of ruling the world. After they kidnap Princess Zelda, it is up to Link to defeat them and rescue the princess. The dragons have imprisoned Zelda behind a seal that requires all eight pieces of the Triforce to unlock. Each dragon, located at the top level of each of the eight dungeons, holds one piece of the Triforce, as such, Link must defeat them all in order to save Zelda.

Because of the limitations of the LCD screen, there is no elaborate ending sequence. When the eighth dragon has been defeated, Princess Zelda walks out of her prison and right up to Link (just as she does in The Adventure of Link) as if to embrace him, but the animation ends just before they meet, leaving the end result up to the player's imagination.

In 1998, Toymax Inc. was licensed to make keychain-sized remakes of the Game & Watch series under the Nintendo Mini Classics line, one of them being the Game & Watch: Zelda. It has a significantly smaller screen size, and unlike its predecessor, more closely resembles a Game Boy than a Nintendo DS. Overtime 2007, distributor Stadlbauer and It's Outrageous! have begun distributing the Mini Classics version in select locations within the United States, instead using art from The Legend of Zelda: A Link to the Past and The Legend of Zelda: Four Swords Adventures.

In October 2002, Nintendo included a port of the game as a hidden unlockable extra in Game & Watch Gallery 4 for the Game Boy Advance. It is the very last unlockable game available, requiring the most number of stars collected from playing the other games to unlock. To accommodate the one-screen console to which the game was ported, changes were made to the game's visuals; in order to fit everything onscreen at once, the non-gameplay screen is reduced to two thirds of the height of the original screen. 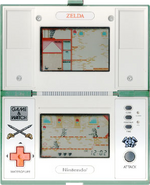 The Game & Watch, showing the exclusive artwork on the cover