This article is about the The Legend of Zelda boss. For the recurring character, see Ganon.

Gannon (ガノン, Ganon?) is the final boss of The Legend of Zelda. He kidnapped Princess Zelda and holds her hostage in his lair at Death Mountain. After obtaining all eight Triforce Shards, Link can enter Level 9 to slay Gannon and rescue Princess Zelda.

Gannon's chamber contains statues that shoot fireballs at Link while Gannon himself teleports around the room, though he is invisible as he does so. Gannon also attacks by shooting fireballs that do a decent amount of damage. To damage Gannon, Link must blindly swing his sword in hopes of hitting the invisible Gannon, who will briefly turn visible whenever Link's sword connects. After Link gets in enough hits with his sword, Gannon will change color, signifying his vulnerability. Link must immediately fire a Silver Arrow at the weakened Gannon to finish off the antagonist. Once he has done so, Gannon crumbles to ash and vanishes, leaving the Triforce of Power for Link to take so he can rescue Princess Zelda. There is no other way to defeat him. 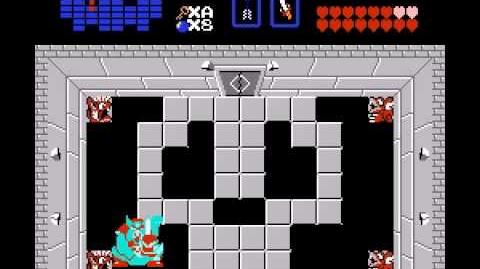 In the instruction booklet for The Legend of Zelda, his name was spelled Ganon. However, in the in-game intro itself, it was misspelled Gannon. This error was corrected for the Collector's Edition, Game Boy Advance, and Virtual Console re-releases of the game. However, it is spelled as Gannon once again in the 3DS Virtual Console release.

Contrary to popular belief, the name "Gannon" has applied to other sources. For instance, the Japanese version of Zelda II: The Adventure of Link also misspelled the name during the intro and game over text, and the dungeon in the Japanese version of The Legend of Zelda: A Link to the Past is also called Gannon's Tower. Gannon was also present in the CD-i game Zelda's Adventure.

Gannon's 8-bit sprite from The Legend of Zelda is used to represent Ganon on Adventure Mode maps.

Retrieved from "https://zelda-archive.fandom.com/wiki/Gannon?oldid=532067"
Community content is available under CC-BY-SA unless otherwise noted.