Zeldapedia
Register
Don't have an account?
Sign In
Advertisement
in: Final bosses, The Legend of Zelda: Four Swords Adventures bosses

Underground chamber of the Tower of Winds

"Ganon... this beast was once of the Gerudo... Once human. He was called Ganondorf!"
— Princess Zelda

Ganon is the final boss of The Legend of Zelda: Four Swords Adventures.

It is not revealed until the Lost Woods that Ganon is the main antagonist of the game; however, as the game progresses, it becomes more apparent that Vaati is not the true antagonist. While exploring the Pyramid in The Desert of Doubt, Link learns that Ganondorf stole the Trident, presumably the cause of his transformation into the evil beast Ganon.

After Link defeats Vaati in the Palace of Winds, the Realm of the Heavens and Tower of Winds begin to crumble, and Link and Princess Zelda must descend the tower to return to Hyrule. Feet before the entrance, however, the floor crumbles and they land in an underground chamber. When Princess Zelda tries to seal away the raw darkness that approaches, Ganon seals her away, reveals himself, and attacks Link.

Ganon constantly teleports around the room, spinning his Trident. As Link does damage to him, he will periodically hold his trident above his head and send down lightning, sending Link to the Dark World if he is hit. To return to the arena, Link must defeat four regular Stalfos and a fifth that wields a sword, followed by a Base Creature of Magic.

Halfway through the fight, Ganon stops attempting to send Link to the Dark World and uses a new attack. He will switch Link's position with his and throw his trident as one would a boomerang, with the trident's tip leaving a trail of blue flame. If the trident hits Link, it hurls him across the room, similar to the attack of a Ball & Chain Trooper.

After enough damage is done, Zelda escapes, gives Link the Level 2 Bow, and begins charging a ball of light. Ganon will then fire green energy balls at Link, which can be reflected by the Four Sword to deal damage. When the ball of light is fully formed, Zelda fires it at Ganon and it begins circling him. To finish Ganon off, Link must charge up an arrow and fire it through the light ball into Ganon. The final cut-scene then ensues. The Seven Maidens gather around the fully subdued Ganon and seal him away inside the Four Sword. The Four Sword is then taken back to the Four Sword Sanctuary, where it is sealed away for good. 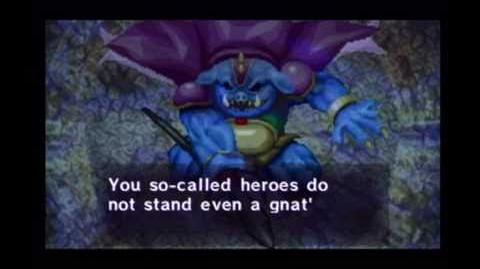