During his first phase, Ganon initially wields powers of other giant bosses (save for The Imprisoned, the Helmaroc King, and Phantom Ganon), which can be disabled with the same weapons used against their inspirations:

Each time one of these attacks is negated, part of Ganon's body will show damage; his tail and right tusk will break off, his bracers will be damaged, and his shoulder spikes will be reduced to stumps. He will no longer use the corresponding attack when each part is destroyed.

After losing all of his "boss" attacks, Ganon will begin using new moves, including beams and waves of dark energy and brutal physical attacks. Zelda (or Ruto if the Zelda is being used as the main character) will provide Light Arrows to use against the Demon Beast. When his forehead glows purple, they can be fired to stun him and expose his weak spot. The length of his stun time depends on how many allied commanders are still on the battlefield.

Dark Ganon is a shadowy doppelgänger of Ganon. Unlike Dark Link, he has no role in the main story and appears as a Giant Boss in Adventure and Challenge Mode. He has the same weaknesses, attacks, and Materials as Ganon.

Like in The Legend of Zelda, this scenario can be found on the square where Spectacle Rock is located. In order to play the scenario a Bomb Item Card must be used on the left eye rock formation (where the entrance to Level 9 is located in The Legend of Zelda). In the scenario, Link and his allies must defeat the enemy forces lead by Lana and Cia. After Cia is defeated, she summons Ganon in a last ditch effort to defeat Link. Ganon is fought using the same tactics as in Legends Mode; however, the Bow has the same effect as Light Arrows.

Outside of the main story and Adventure Mode, Ganon is also playable in the DLC Challenge Mode, Ganon's Fury, which is part of the Boss Pack DLC. Defeating other Bosses allows Ganon to obtain Boss Attack Items that act as Ganon's own set of unique items. Like most playable characters, he can perform combos, a Special Attack, Focus Spirit, and a powerful Focus Spirit Attack. He uses his King of Evil Trident during his weak point attacks and as part of his Focus Spirit Attack. Unlike other playable characters, he is larger and capable of making Bosses flinch when he attacks them, due to being of similar size.

Ganon is Ganondorf's powerful demonic form and his evil heart personified. With the power of the Triforce at his command, he is a force to be reckoned with, possessing the powers and abilities of several bosses, though he also inherits their weaknesses as well. He is also remains vulnerable to the power of divine weapons such as the Light Arrows and the Master Sword. In addition to the powers he demonstrates in the main story, he is also shown to be capable of breaking the fabric of reality like it were glass in his battle intro in Adventure Mode. 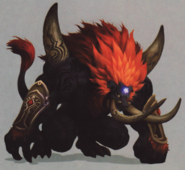 Ganon appearing before Link after being transformed by the Triforce

Ganon is resealed by the power of the Triforce 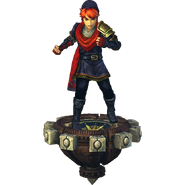