Zeldapedia
Register
Don't have an account?
Sign In
Advertisement
in: The Legend of Zelda: Twilight Princess bosses, Final bosses

"Your opponent may be a beast of pure evil, but remember, it's still just a pig, Link."
— Midna

Dark Beast, Ganon (魔獣ガノン, Majū Ganon?, Demonic Beast: Ganon) is a boss from The Legend of Zelda: Twilight Princess. He appears as a monstrous boar, but is more leonine in appearance than in other iterations, with a long mane and claws. His weak spot is where the Ancient Sages struck him with the Sword of the Six Sages, which appears as a glowing wound across his stomach.

His attack on Link while possessing Zelda's body having failed, Ganondorf appears defeated. Zelda's soul is returned to her body, but after a brief reunion between her, Link, and Midna, Ganondorf rematerializes, immediately transforming into the behemoth, boar-like creature known as Ganon. He erects a magical barrier to prevent Zelda from intervening and attacks Link, who must utilize his own beast form to defeat Ganon. Afterwards, Ganon's body is immolated in greenish flames, until these coalesce into a huge flaming image of Ganondorf's head.

When the battle starts, Ganon will run around the room destroying the pillars that make up the area. He will then warp out of the room and summon red Twilight portals, which fade a few seconds after appearing. One of the portals remains longer than the others and turns blue; Ganon emerges from this portal and charges Link. Occasionally, Ganon will instead materialize above Link in an attempt to crush him—to evade this attack, Link must run away as Ganon's shadow appears overhead. Link may use the Hero's Bow and aim for the glowing jewel on Ganon's forehead, or he can smash Ganon's head with the Ball and Chain. He can also fight as Wolf Link, in a process similar to stopping Ordon Goats or rolling Gorons: press and hold the A button at precisely the right moment during Ganon's charge to cause Midna to grab the beast, at which point tilt the control stick will throw Ganon onto his side. As a result of any of these methods, Ganon is knocked over, and Link can attack the wound on the beast's side using either his wolf form or the Master Sword.

After Ganon sustains enough damage, he will start disappearing whenever Link attempts to stun him from a distance. In order to defeat Ganon, Link must now heed Midna's advice and fight exclusively with his wolf form, using the method described above. After several more blows, Ganon is defeated, only to return to fight Link on horseback.

At any time during the battle, Link can obtain a Fairy from a pot directly to the right of the Throne Room's entrance. 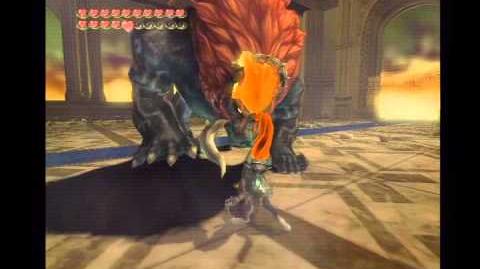