Zeldapedia
Register
Don't have an account?
Sign In
Advertisement
in: Final bosses, The Legend of Zelda: The Wind Waker bosses, Gerudo

"Now! Let us put an end to that which binds us together! Gods! Hear that which I desire! Expose this land to the rays of the sun once more! Let them burn forth! Give Hyrule to me!"
— Ganondorf

Ganondorf is the final boss of The Legend of Zelda: The Wind Waker. The battle is Ganondorf's second form, following a battle with Puppet Ganon. The battle is set on the top of Ganon's Tower, to the backdrop of the pouring flood waters surrounding the tower. 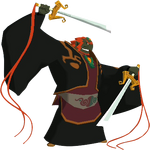 When Link arrives at the top of Ganon's Tower after defeating Puppet Ganon, Ganondorf reveals his motives for attempting to conquer Hyrule. He says that in his homeland, the wind always brought death with it, whether it was night or day. In Hyrule, however, the wind was a peaceful one, and Ganondorf admits to having coveted Hyrule's wind. He then muses that the power of the Triforce could grant him any wish in his heart, and that the gods would have no choice but to grant it to him.

Ganondorf proclaims that the pieces of Power and Wisdom are already his, and only one piece remains before assaulting Link with a series of swift punches. Ganondorf then calls forth the three pieces of the Triforce, and they assemble before him. Cackling madly, he states his wish to expose Hyrule to the sun and remove the ocean from Hyrule so he can conquer it. Before he can touch the Triforce, however, Daphnes Nohansen Hyrule touches it and wishes for the ocean to forever cover Hyrule, and for Link and Tetra to have a future above the ocean.

Scoffing at the king's wish, Ganondorf says he will show Link and Tetra their future, implying his intention to kill them both, draws two swords, and begins to battle Link.

The fight against Ganondorf is a sword duel. He will swipe at Link and leap around the stage, avoiding Princess Zelda's Light Arrows; therefore, Link must distract Ganondorf by making him not look at Zelda's direction. If Zelda manages to hit him, he is left vulnerable to sword attacks from Link. Sometimes, the Light Arrow might strike Link by accident, due to Zelda's misfire or Ganondorf jumping out of the way while Link still so happens to be in the arrow's path. If this happens, Link is shocked and suffers one heart worth of damage. Alternatively, Link can use parries to damage him, and can even keep attacking Ganondorf to have him drop his guard to trigger a parry, both of which will leave Ganondorf open for further attacks. Although Link can use the Mirror Shield to block Ganondorf's sword strikes, if he keeps it up, Ganondorf will resort to kicking Link under the shield, causing one heart of damage and sending Link flying back.

After being struck with three Light Arrows, Ganondorf will knock out Zelda. Link must then attack Ganondorf repeatedly, forcing him to drop his guard and parry him. After Zelda awakens, Ganondorf becomes invulnerable to Link's parries and Zelda's Light Arrows, as he blocks and jumps over them, respectively. If Link speaks to Zelda, she will ask Link to deflect her Light Arrows off of his Mirror Shield. This leaves Ganondorf open to attacks and a final parry attack which impales him through the top of the head, defeating him and, with the Master Sword embedded in him forever, turning him to stone. The torrent of water crashes down, burying Ganondorf and the Master Sword underneath the ocean. 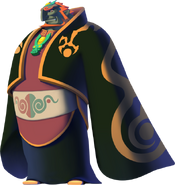 Artwork of Ganondorf from The Wind Waker HD

Render of Ganondorf's Sword from The Wind Waker 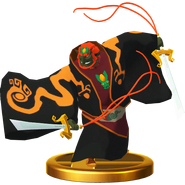 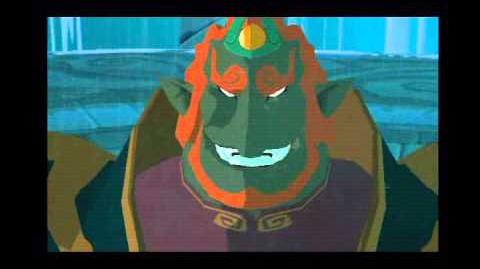