Zeldapedia
Register
Don't have an account?
Sign In
Advertisement
in: Final bosses, The Legend of Zelda: Twilight Princess bosses

Sword of the Six Sages

"An impressive-looking blade... but nothing more. Would you hear my desire? To take this foul blade... and use it to blot out the light forever!"
— Ganondorf

Having been defeated while possessing Princess Zelda, as the monstrous Ganon, and on horseback, Ganondorf finally draws his sword. He erects a twilight barrier to keep Zelda and Epona from interfering and challenges Link to a one-on-one duel.

Ganondorf plods around rather slowly, but actively blocks and dodges Link's attacks, forcing Link to use his various sword techniques. Ganondorf's attacks consist of slashes and stabs with his sword, as well as kicks and elbow strikes. He can hop back to avoid Link's attacks, and jump high into the air to get behind Link for a strike. Occasionally, Link can optionally enter a chance sword lock, which can leave Ganondorf very vulnerable if Link succeeds. During the sword locks, the A button must be pressed repeatedly to throw Ganondorf off balance. Also, on the Wii version, shaking the Wii Remote and Nunchuk will make it easier to overpower him. After Ganondorf is hurt a number of times, he will fall to the floor, allowing Link to finish him with an Ending Blow. On a related note, the music changes during the blade lock depending on whether Ganondorf or Link was winning the blade lock, which was similar to the Dead Man's Volley segment of the Phantom Ganon boss fights in The Wind Waker.

Interestingly, Ganondorf can be defeated by distracting him with the Fishing Rod. While he is staring at it, Link can freely hit him with the Master Sword. The technique is sometimes regarded as a glitch, but has been included on purpose. This technique is comparable to a technique of the boss battles against Ganondorf in Ocarina of Time and Phantom Ganon from The Wind Waker, where both can be defeated by using a bottle, as well as Demise, who can be distracted using the Bug-Catching Net. 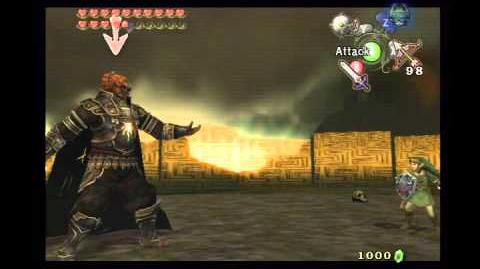