Zeldapedia
Register
Don't have an account?
Sign In
Advertisement
in: The Legend of Zelda: Twilight Princess bosses, Final bosses

Ganondorf on horseback is the penultimate boss in The Legend of Zelda: Twilight Princess. Ganondorf utilizes his steed in a horseback duel with Link. This is the first time in any game that Ganondorf displays proficiency in horseback combat.

After Midna warps Link and Zelda to Hyrule Field, the two see Hyrule Castle destroyed in a large explosion. Ganondorf emerges out of the dust on horseback, carrying Midna's Fused Shadow helmet, seemingly indicating her defeat. As the helmet crumbles in his hand, Ganondorf charges at Link and Zelda. The Princess prays to the Light Spirits, asking them to grant her the "light to banish evil", and in the split second before Ganondorf tramples them, she and Link are transported to another realm. Here, the Light Spirits bestow upon Zelda the sacred Light Arrows, and then transport the two back to Hyrule Field, where they find themselves sitting atop Epona.

As Link pursues Ganondorf, Zelda stuns him with her Light Arrows, after which Link must strike the Dark Lord with his sword or bow. Ganondorf repeatedly conjures Phantom Riders to assist him throughout the battle, which can be defeated with a sword slash or avoided entirely. He also periodically charges, attempting to knock Link off of Epona. Zelda asks Link to keep Ganondorf within range of her arrows; when Link rides close enough, she fires Light Arrows from the Bow of Light. Link must get relatively close for Zelda's shots to connect, but she fortunately never runs out of arrows. Once stunned by a Light Arrow, Ganondorf slows considerably and is vulnerable to attack. After being attacked several times, his horse collapses and he is thrown to the ground. Link must then fight Ganondorf sword to sword. Interestingly, this is the only one of Ganondorf's phases in which the Ordon Sword can be used to damage him, possibly due to the Light Arrows weakening his defenses. 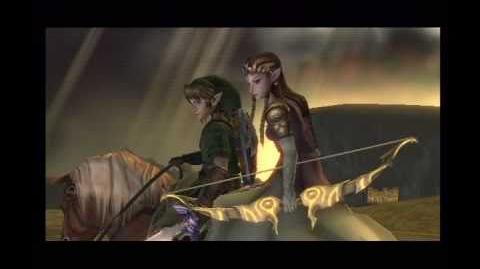