Zeldapedia
Register
Don't have an account?
Sign In
Advertisement
in: Previous featured articles, Articles with non-canonical information, The Legend of Zelda: Oracle of Seasons characters
English

This page is about the character. For the boss fight, see General Onox (boss).

"As you know, if I imprison the Oracle of Seasons and bury the temple that houses the Season Spirits, the seasons of Holodrum will be cast into chaos, the bountiful gifts of nature will rot, and all living things perish!!! That is the world of darkness that I long for!"
— General Onox

), the General of Darkness (闇の将軍, Yami no Shōgun?), is the primary antagonist of The Legend of Zelda: Oracle of Seasons. Doing the bidding of Koume and Kotake, Onox throws the seasons of Holodrum into chaos, in order to cause enough damage to the peaceful land to light the Flame of Destruction, a necessary step in resurrecting Koume and Kotake's master, Ganon. Interestingly, artwork depicts the Gerudo symbol on Onox's armor, a symbol also found on the clothing of Veran, his villainous counterpart from The Legend of Zelda: Oracle of Ages.

General Onox is a ruthless, apathetic tyrant who originated within the very depths of the dark realm. He exhibits a superiority complex, often taunting and prodding Link throughout his adventure. Well aware of his purpose, Onox longs for the corrupted world that he is being made to create and shows no signs of fear towards Link, Din, the Maku Tree, or anyone else. It is unknown whether his strength and power was his own to begin with, or if he was granted them by Koume and Kotake when he decided to join up with them. Interestingly, if Link manages to defeat Veran before going to Holodrum, General Onox will recognize Link as the person who defeated Veran while Link is defending Din, and claim that he is stronger than she was.

The humanoid form of Onox, who is encased in nigh-impenetrable golden armor, is that of a man of huge stature, more than four times Link's size; furthermore, he possesses immense physical strength. He uses his strength, attributes to his advantage in battle, his weight alone having the power to make a roof collapse and damage his opponent. In battle, Onox uses a ball and chain, which he wields with considerable ease. He also possesses the ability to summon whirlwinds and tornadoes in battle, and even manages to somehow use one to "conceal" himself when he kidnaps Din. In his true form, that of a Dark Dragon, Onox attacks with his claws and breathes different types of fireballs at Link; in this form, he is impervious to damage, except attacks directed exactly at his weak spot, namely, the jewel embedded in his forehead. Notably, the humanoid form of Onox closely resembles the typical design of an Iron Knuckle, and it is possible he may be somehow related to these enemies. Zant from The Legend of Zelda: Twilight Princess also resembles Onox somewhat due to the shape of his helmet and the Gerudo Symbol on his clothing.

Upon his arrival in the land of Holodrum, the hero Link meets the dancer, Din, and her troupe of jovial performers. Suddenly, a whirling tornado appears, wreaking havoc on the peaceful camp. Link and the performers are all blown away, and the tornado reveals itself to be General Onox. Onox kidnaps Din, who is in truth the Oracle of Seasons, and whisks her away to his castle. Here, he imprisons her inside a giant Crystal and lowers the Temple of Seasons into the subterranean country of Subrosia, restraining the Season Spirits and throwing the seasons of Holodrum into utter chaos. Link seeks the aid of the Maku Tree, who tells him that in order to enter Onox's Castle and free Din, he must gather the eight Essences of Nature from the eight dungeons of Holodrum to restore the withered Maku Tree to his full power.

In the process of gathering the Essences of Nature, Link fully restores the power of the Rod of Seasons, granting him partial control over the seasons of Holodrum. Meanwhile, General Onox remains within his castle at the Northern Peak, standing close guard over Din. Instead, Koume and Kotake assume a more active role in attempting to stop Link from ruining their plans, disguising themselves as an innocent old lady and attempting to deter Link from completing his quest. When Link successfully gathers all of the Essences of Nature, he returns to the Maku Tree, who uses the power of the Essences of Nature to produce a Maku Seed, an item that has the power to break the dark barrier surrounding Onox's Castle. Link then travels to the palace where Onox awaits him.

After battling through Onox's hordes of minions, Link finally comes face to face with General Onox. When defeated one-on-one by Link, Onox resorts to using the imprisoned Din as a shield from Link's attacks. Link manages to successfully deflect the imprisoned Din with the Rod of Seasons and defeats Onox once more. However, as Link and Din begin to believe that Onox has been defeated for good, the floor of the castle crumbles, and Link finds himself in the castle's dungeon. Here, Onox explains to Link that during the earlier battles against him, he did not utilize his full power, and transforms to his true form, that of a powerful Dark Dragon, revealing that he was actually a demon summoned by Koume and Kotake from the dark realm. After a fierce battle, where Link must damage his only weak spot, the jewel embedded in the skull of the beast, Onox is finally defeated. However, Koume and Kotake's plan succeeded, and although Link triumphs over General Onox and restores the chaotic seasons, the Flame of Destruction is lit, and Ganon's return grows ever closer.

The Legend of Zelda: Oracle of Seasons manga

General Onox plays largely the same role as in the game, but his character is notably more fleshed out. Despite being an evil villain, General Onox states that he aims to be a gentleman at all times. Also, he possesses the additional ability to cause everything that he comes in contact with to wither by absorbing its life force, and he can release a breath that weakens the living. Also, contradicting the description of General Onox, Link finds that he is, in fact, not human probably because of his use of his dark powers.

General Onox is possibly named after the mineral onyx, a hard substance that resembles Onox's full armored appearance. His Japanese name, Gorgon, likely refers to a mythological race of creatures by the same name, a notable member being Medusa who also appears as the boss of Sword & Shield Maze.

Alternate artwork of General Onox from the Hyrule Historia

General Onox from the manga 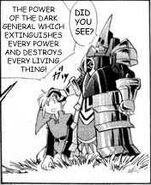 Onox, defeating Link during their first encounter, in the manga

The Dark Dragon from the manga