"While a spirit inhabiting a sacred sword came through the portal from Skyloft, so too did a spirit from a fearsome and demonic sword, ready to wreak havoc once more. As a Demon Lord, Ghirahim commanded legions of monsters during a campaign to resurrect his true master, the Demon King Demise. Being a sword himself, Ghirahim knows the fine art of swordplay and proves himself a deadly fencer with added magical powers. He may come off as soft, but he's truly deadly in combat."
— Historical Entry Tutorial Bio

) is a playable character in Hyrule Warriors and Hyrule Warriors Legends. He is spirit of a demonic sword that was once wielded by the Demon King Demise. A high ranking member of the Demon Tribe, he seeks to resurrect his master from his imprisonment in the Era of Skyloft.

At first glance, Ghirahim appears to be calm, confident, and collected, although very flamboyant. He often acts gentlemanly, speaking eloquently and formally introducing himself to Link. He exhibits traits of narcissism and has a flair for the dramatic, and enjoys using broad gestures.

He is extremely loyal to his master Demise and most of his actions in Skyward Sword where driven by his desire to free his master from his imprisonment. He also appeared to enjoy returning to his true form as Demise's Sword.

Beneath his calm exterior, however, is a violent and sadistic psychopath. As the story progresses, his composure progressively shatters, and his mannerisms and speech become more melodramatic, colorful, and violent. At his core, Ghirahim is merciless and enjoys bloodshed; his violent personality shows quite graphically in the way he frequently licks his lips during a fight and even licking the blade of his sword at times. Ghirahim frequently loses himself to uncontrollable rage, easily finding excuses to take his anger out on his enemies. He also enjoys intimidating and toying with his victims, frequently teleporting behind them and making colorful threats. He is also ruthless to his own minions.

During Adventure Mode missions where he is an ally against Giant Bosses, he has a tendency for betrayal. In many ways, he is the polar opposite of his nemesis Fi, the Spirit of the Goddess Sword.

A powerful Demon in his own right (second only to his master), Ghirahim is capable of teleportation, materializing and dematerializing objects (usually weapons) out of thin air, and summoning Bokoblins. A user of dark magic, Ghirahim can create Magic Circles and manipulate magical energy that takes the form of geometric shapes. Being a sword himself, Ghirahim is a natural born swordsman who wields various Demon Blades, as well as blades of varying size. He is also capable of transforming into his true spirit form (where he transforms into a demonic being that resembles the form of Fi), and even his sword form.

Dark Ghirahim is a shadowy doppelgänger of Ghirahim that appears as an enemy in Adventure Mode. He has the same moveset and Material drops as Ghirahim.

Fake Ghirahim is a body double that appears as an enemy in Enduring Resolve story scenario. He appears as a paler version of Ghirahim, with the same moveset, materials, height, and weight as Ghirahim himself. 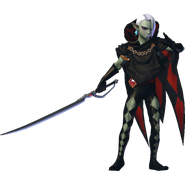 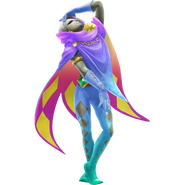 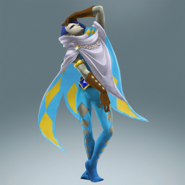