This article is about the boss. For the character, see Ghirahim.

"Come to me, Link. You and I, we're bound by that thread of fate. Destined to fight."
— Ghirahim

Throughout the course of the game, Ghirahim is fought three times: first in Skyview Temple, again in the Fire Sanctuary, and finally in Hylia's Realm at the end of the game. His boss theme is a faster and more dramatic version of his character theme.

Ghirahim is the boss of the Skyview Temple and the first boss of the game. In battle, Ghirahim has the ability to jump great distances, move with great speed, and teleport around the room. He will start the battle fighting with his right hand generating a red aura on his fingertips. Ghirahim has the ability to grab the Goddess Sword mid-swing and hold it in place using his two fingers. If Link does not swing his sword after a while, Ghirahim will backhand Link. If Ghirahim catches Link's sword, Link must quickly force it up and down to loosen Ghirahim's grip, or Ghirahim will steal the weapon and use it himself. In order to get it back, Link can either use a Shield Bash to knock the sword out of his hands, or avoid Ghirahim, which will prompt him to hurl the sword at Link like a throwing knife. Link must dodge this attack, then quickly pick up the sword before Ghirahim does.

Ghirahim can only be attacked from an angle he is not currently defending with his right hand. If Link holds his sword in one direction, then quickly moves it so that it will hit elsewhere, there is a chance that Ghirahim will not move his right hand for a short period, leaving him open for attack. He can also be feinted by using the Shield Bash to hide Link's sword direction and then attacking; this method almost guarantees Link's ability to hit him. Ghirahim will still attempt to track the sword, but due to Link's limited arm motion radius with a raised shield, his hand hovers in one general area, leaving him open. Another strategy is to use a Skyward Strike to stun him, but Ghirahim will dodge any attempt of using a Skyward Strike from long range with an extremely fast sidestep maneuver, and if Link is too close, Ghirahim will catch his sword. If Link attacks with other projectiles, they will be deflected, causing a ripple effect in the air as if stopped by some form of defensive magic.

After taking enough damage, Ghirahim will snap his fingers, summoning a sword of his own, and cease his attempts to grab Link's sword. This leaves him vulnerable to attacks opposing his sword's position. If Link does strike his sword, Ghirahim will counterattack immediately. He also teleports more frequently, often behind Link to attack him. Ghirahim will also charge at Link, telegraphed by how he ducks down beforehand to assume a reverse sword grip stance. While charging at Link, Ghirahim will be open to attacks before he slashes, or to creating an opening using a shield bash. He also possesses the power to create a line of daggers, which can be deflected with sword attacks, Skyward Strikes, or shield bashes. He is an extremely strong and agile character, toying with Link during their first encounter.

Ghirahim serves as the boss of the Fire Sanctuary, his arms turning black while his face and body show dark cracking patterns. This battle flows somewhat similarly to the first, with some noticeable changes. Like before, Ghirahim first attacks by grabbing Link's sword with his right hand, but now summons two daggers which hover around him. These act as shields, absorbing one of Link's attacks from a given direction, and will also be fired as projectiles when Link is at a distance. When Ghirahim catches Link's sword, instead of forcing the sword out of Link's hand, he will snap his fingers and fire the daggers at short range. Link must once again trick Ghirahim into moving his hand to one side and attack from the opposite side, but must be careful not to strike the daggers, as this will alert Ghirahim. Alternatively, Link can knock away the daggers before attacking Ghirahim. After taking some damage, Ghirahim will summon two additional daggers to form a square.

After sustaining enough damage, Ghirahim abandons his previous attack pattern and summons two swords to fight with. In this phase, Ghirahim is fought similarly to a Stalfos. Depending on the orientation of his swords, Link must attack horizontally, vertically, or diagonally. Striking one of Ghirahim's raised swords will result in an immediate counterattack. Unlike a Stalfos, Ghirahim is vulnerable to stabs, and will not counter them. Sometimes Ghirahim will not raise his weapons, instead blocking Link's next two attacks instantly with his own swords. In these cases Link can dictate the position of Ghirahim's guard and then attack successfully from a third angle, only being countered if he attacks the same way twice, striking an already raised sword.

Ghirahim's attacks have been improved in this fight, as he can summon more daggers, usually in a horizontal circle around Link or in an arc above him. The most efficient means of preventing these daggers from darting inward at Link is a spin attack at the correct angle, as it will knock away the entire formation of daggers in one motion. Ghirahim can also summon daggers in a circle around himself, and fire three successive rows of them at various orientations. Unlike in the first battle, these formations of daggers can also home in on Link slightly, making them more difficult to dodge. Also, his charge attack is replaced by an attack where he teleports into the air and strikes from above. If dodged, this attack also leaves him vulnerable, as his swords get stuck in the floor, similar to when Link misses with a Fatal Blow. After sustaining enough damage, Ghirahim will retreat.

Ghirahim is battled in the Sealed Grounds, and serves as the penultimate boss of the game. In this battle, Ghirahim faces Link in his most powerful form. Unlike previous battles where he would grab Link's sword and use it against him, Ghirahim now attacks with fierce punches and roundhouse kicks. Ghirahim also cannot be damaged under normal circumstances. To defeat Ghirahim, Link must repeatedly attack the boss and send him to the edge of the platform, then deliver a final strike that will cause him to fall to the lower platform (which was what he stated that he intended to use against Link in a method called the "Endless Plunge"). Link can then deliver a Fatal Blow to the crystal on his chest. If Link does not knock him off in time, Ghirahim will regain his balance and jump towards the center of the platform. Also, if Link does not use the Fatal Blow on Ghirahim, Ghirahim will float up the platform to engage Link in battle again. After repeating this three times, the fight moves to the bottom of the Sealed Grounds. When Ghirahim's hands are coated with purple electricity, should Link touch them, he will be stunned momentarily, allowing Ghirahim to maneuver around and attack from behind.

The crystal on Ghirahim's chest has now cracked, revealing a red diamond that serves as his weak spot. In this round, Ghirahim wields a sword like the ones he used in previous battles. He retains his dagger toss and gains the ability to launch a fiery variation of the Skyward Strike. Link can repulse this attack in the same manner as Ghirahim's daggers by slashing diagonally, vertically, or horizontally depending on the angle Ghirahim launched it at him, but doing so initiates a match of Dead Man's Volley. If Link slashes in the wrong direction, his Skyward Strike will hurtle away and miss Ghirahim. Link and Ghirahim must continue to return each other's volleys until one of them misses. If Ghirahim misses, he will be stunned and vulnerable to attack. If Link uses a Skyward Strike to repel Ghirahim's, they will both disappear. To damage Ghirahim, Link must attack the red diamond on Ghirahim's chest with a stab. In addition to the previous strategy, Link can expose Ghirahim's weak point if he manages to knock Ghirahim's sword out of his hands, either via Shield Bash, or striking his sword a number of times.

After taking enough hits, Ghirahim summons a much larger sword. Now Link must knock him off guard or otherwise force him to guard, then repeatedly slash at the sword's edge to destroy it. The direction of Link's sword strikes must be perpendicular to Ghirahim's sword. Ghirahim may change the orientation of his sword to make it harder for Link to strike the same edge. Link must strike Ghirahim's sword on the same edge four times to break the weapon. Note that if Link charges energy for a Skyward Strike and stabs Ghirahim, Ghirahim will be stunned, allowing Link to get in more hits. This strategy must be repeated to defeat Ghirahim once and for all. 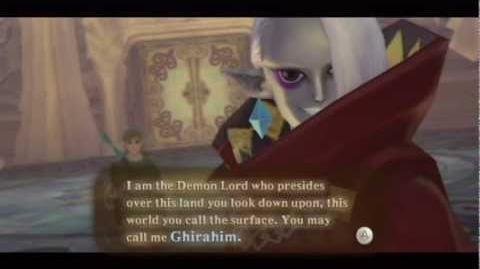 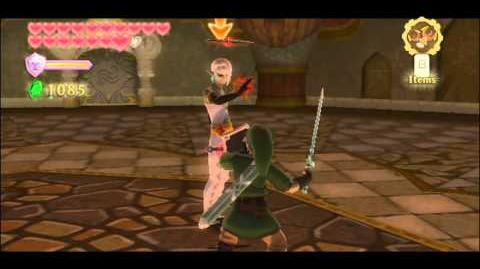 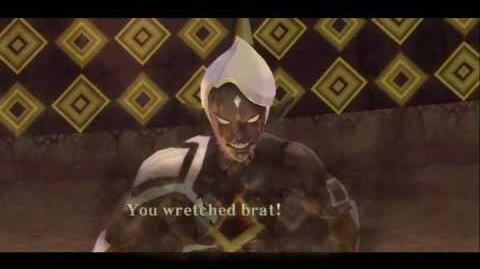