"Oh...you are quite an energetic young man. You're brave and handsome, too. Heh heh heh...your name is Link, isn't it. Heh heh he...don't be surprised. I can read people's minds. [...] My shop is the only Ghost Shop in Hyrule. [...] The ghosts, called Poes, are spirits of concentrated hatred that appear in the fields and graveyard. They hate the world! Young man, if you catch a Poe, I will pay a lot of money for it... Heh heh hee!"
— Ghost Hunter

The Ghost Hunter is a recurring character in the Legend of Zelda series. He is a mysterious figure draped in purple robes, with only a bright red dot, possibly representing an eye or a face, visible underneath his hood. In most instances, the strange demeanor of the Ghost Hunter is attributed to the fact that he may be undead.

The Ghost Hunter seems to have a profound insight into Link's situation due to his purported ability to read people's minds. He also seems to take delight in acts of maliciousness: he clearly remarks that he admires the destruction caused by Ganondorf and considers it to be beautiful. Interestingly, his belt bears an image of the Triforce. 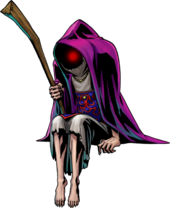 The Ghost Hunter first appears on the Road to Ikana, sitting atop a cliff, where he tells Link to bring a special mask in order to pass. Link eventually wins the Garo's Mask from the Gorman Brothers in a horse race, and the Ghost Hunter summons a tree, which Link can use to transport himself to the top of the hill with the use of the Hookshot. The Ghost Hunter believes that with the help of the Garo's Mask, Link may be able to lay to rest the regretful spirits that linger in the land of Ikana. After this event, the Ghost Hunter can be found in the Spirit House atop Ikana Canyon, where he runs a mini-game. In this mini-game, Link must defeat the four Poe Sisters within the time limit, 'soothing their souls' and allowing them to pass on. After he completes this, Link is given a Piece of Heart.

The Ghost Hunter is encountered for the last time in the Secret Shrine, found behind the main waterfall that feeds Ikana Canyon's river. Here he runs another mini-game: Link must battle four mini-bosses he has already fought, one from each of the four dungeons. When Link accomplishes this final task, the Ghost Hunter gives him a Piece of Heart, and states that Link has managed to heal the souls that he has just defeated. The Ghost Hunter's statement that he may soon vanish as well, along with his ability to fade in and out of sight, indicate that he is likely a ghost himself.

Interestingly, the Ghost Hunter lacks the Triforce symbol found on his clothing in Ocarina of Time. This may be due to the fact that the game takes place in Termina rather than Hyrule.

In Ocarina of Time, when Link is a child, a Hyrulean Soldier who wishes there was more chaos in the world and expresses interest in ghosts can be found inside the small guardhouse near the entrance to Hyrule Castle Town. When Link returns as an adult, the small house has become the Ghost Shop. It is possible that the soldier was killed during Ganondorf's attack on Hyrule Castle and chose to pursue his interest in spirits as a ghost himself. It could also be that he underwent some sort of transformation with the aid of Ganondorf. It should be noted that the Ghost Hunter has a picture of the Triforce on the wall behind his shop and a picture of it on his belt with the bird-like part of the Hylian crest moved up a little. Out of those theorized to be the Ghost Hunter, this man, being a Hyrulean Soldier, is the only one who would have a connection to the Triforce emblem.

Boy in the Graveyard

In Ocarina of Time, there is a young boy who can be found playing in Kakariko Graveyard when Link is a child. He is seen patrolling the graves with a stick similar to that of the Ghost Hunter, in an attempt to imitate Dampé the gravekeeper. This child is never seen when Link returns to Kakariko Village as an adult, and it is possible that he somehow becomes the Ghost Hunter and relocates to the ruins of Hyrule Castle Town.

A counter-argument to this theory is that the boy doesn't seem to like trouble, and when Link attempts to move gravestones, the boy tells him to stop and threatens to tell Dampé. The Ghost Hunter is the opposite and desires to see the world fall into disorder. Of course, its possible that the boy was corrupted/brainwashed by Ganondorf, which could explain his change of character.

Man Who Could See the Truth

In Ocarina of Time, when Link is an adult, an old man can be found around Kakariko Village. He tells Link about a man with an eye that could "see the truth". Link eventually retrieves the Lens of Truth, a Sheikah item that allows him to see the truth, from the Bottom of the Well in the village. It is generally accepted that the unnamed character's truth-seeing eye is the Lens of Truth, but it is also possible that the bright red dot underneath the Ghost Hunter's hood represents this eye, with the Ghost Hunter being the spirit of the unnamed character, whom the old man remarks had long since died.

In Majora's Mask, the Ghost Hunter bears a slight resemblance to Garo Robes, spirits of the Garo ninja who once roamed Ikana. The Ghost Hunter's robe, as well as his frequent appearances in the Ikana area and knowledge of the Garo, may suggest some connection to the Garo tribe. His behavior, however, is vastly different than that of the Garo spirits wandering the area, and his knowledge of ghosts extends well beyond the Garo—suggesting that he is not a Garo himself, nor more connected to them than to any other kind of spirit. 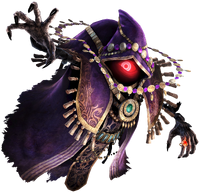 Retrieved from "https://zelda-archive.fandom.com/wiki/Ghost_Hunter?oldid=540729"
Community content is available under CC-BY-SA unless otherwise noted.