Zeldapedia
Register
Don't have an account?
Sign In
Advertisement
in: Ships, The Legend of Zelda: Phantom Hourglass bosses
English

This page is about the boss. For the dungeon, see Ghost Ship (dungeon).

World of the Ocean King

The S.S. Linebeck circles around the ship on its own, allowing Link and Linebeck to focus on taking out the Bellum Blobs that possesses it. Using the cannon easily destroys the blobs, but they regenerate quickly, forcing Link to act fast. Occasionally, the ship will defend itself by firing purple blobs at the ship, which deal one heart's-worth of damage each, and yield hearts when destroyed. After taking out the last Ooze, the Ghost Ship will fall to pieces.

It should be noted that if Link fails to defeat the Ghost Ship or if the system is turned off before confronting Bellumbeck, Link will be free to explore the World of the Ocean King until he chooses to end his quest. 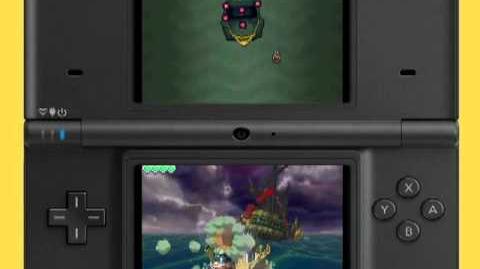