"You got the Giant's Knife! Hold it with both hands and use (B) to attack! It's so long, you can't use it with a shield."
— In-game description

The Giant's Knife is a weapon from The Legend of Zelda: Ocarina of Time. It is the third sword Link can obtain in the game; however, unlike the Kokiri Sword and Master Sword, it is not necessary for completing the game. The Giant's Knife is forged by Medigoron in Goron City and can be purchased as Adult Link for the price of 200 Rupees. The tunnel to Medigoron's Forge is blocked by several stone walls when Link arrives there in the future. These Weak Walls can be destroyed with Bombs. This large sword must be held with both hands, preventing Link from using a shield to block attacks in front of him.

Although the Giant's Knife is twice as powerful as the Master Sword, it is an unusually frail weapon and breaks after a small number of hits. The first time Link purchases the Giant's Knife, it will break after four strikes against enemies, or three against walls. Every subsequent Giant's Knife Link buys will last for one more hit than its predecessor, until it reaches a maximum durability of eight hits (though it will still break in three hits against walls).

When the Giant's Knife breaks, Link retains the hilt and a small part of the blade, similar to a broken Deku Stick. Despite this, the Giant's Knife can still be used after it breaks. However, it deals about the same damage as the Kokiri Sword. Being broken, its range is also very short and he will not be able to perform a Spin Attack. Even while broken, Link must use both of his hands to hold the sword, disabling him from using his shield to block attacks in front of him. As such, it is considered quite an impractical weapon by players.

Link can complete a quest for a more durable weapon known as Biggoron's Sword. It is just as powerful as the unbroken Giant's Knife, but it has been "forged by a master smith and will never break." Getting the Biggoron's Sword replaces the Giant's Knife (broken or not) in Link's arsenal, and Link can no longer buy a Giant's Knife from Medigoron.

The broken Giant's Knife cannot be used in the place of the Broken Goron's Sword for the quest for the Biggoron's Sword, even though their appearance is identical.

The name "Giant's Knife" seems to be derived from the fact that to Medigoron, a Goron of considerable size, the sword would be roughly the size of a knife.

The Giant's Knife appears as the first level weapon of Impa's Giant Blade moveset. It has a single edged curved blade, as opposed to a double edged spear pointed blade. Unlike its predecessor in Ocarina of Time, it is more durable and does not break and it is implied that it was forged by Biggoron (as it is said to have been forged by the finest Goron smithy to ever live), which may explain its durability. The blade has a more ornate design, with aditional signs other than the Goron sigil. Impa carries the blade in a large sheath. Despite the blade's size, Impa is capable of drawing it quickly and even wielding it one-handed. Like all of Impa's Giant Blades, it has a water elemental attribute.

Promotional Render of the Giant's Knife from Hyrule Warriors 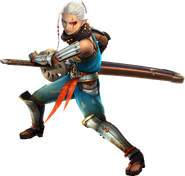