Gibdos (ギブド, Gibudo?) are recurring enemies in the Legend of Zelda series. They are depicted as mummified corpses, and they frequently are both durable and deal heavy damage. They do, however, tend to have a glaring weakness towards fire — in certain games, fire can burn away their bandages, revealing another creature underneath.

Gibdos appear in dungeons 5 and 8 during the First Quest and 2, 4, and 7 during the Second Quest. They are not particularly dexterous, but are durable, requiring multiple hits from even the Magical Sword to destroy, and they deal a significant amount of damage to Link if he is attacked. As far as their attack pattern, they are essentially tougher Stalfos.

Gibdos appear in Skull Woods, the third dungeon in the Dark World. As in their first appearance, they are durable and deal a lot of damage, but their weakness to fire is introduced in this game; a single hit with the Fire Rod defeats them instantly.

Gibdos appear in several dungeons in this game. They are given the unique trait of not recoiling from Link's sword attacks here. Fire burns off their bandages, revealing a Stalfos underneath.

Gibdos strongly resemble ReDeads, being similar in movement, weaknesses, and figure, and both utter the same moan. If Link comes within range of a Gibdo's eyesight, it will freeze him with a piercing scream, jump onto his back and start biting around his neck. Gibdos, however, are more dangerous in this aspect as they always remain in the same position even if one of them is killed. Similar to ReDeads, Gibdos will be frozen in their tracks for a short while if Link plays the "Sun's Song" near them. They are most commonly found in the Shadow Temple, but two are also found at the Bottom of the Well. Unlike in previous games, Gibdos do not change form when they come into contact with fire; however, Din's Fire can be used to damage them and light them on fire. Fire Arrows, on the other hand, will neither light them on fire nor damage them.

In Master Quest, Gibdos commonly appear throughout the Spirit Temple. The Bottom of the Well also contains more Gibdos than in the original release. A lone Gibdo also appears in the Spirit Temple section of Inside Ganon's Castle.

Gibdos are very similar to those in Ocarina of Time. However, they play a much larger role—at one point in the game, Link arrives in Ikana Canyon and finds the Music Box House in a valley haunted by Gibdos. Link manages to restart the flow of water from Spring Water Cave, powering the the Music Box House's water wheel and causing it to play a song called "Farewell to Gibdos", which is loathed by Gibdos. The Gibdos retreat beneath the earth. The Gibdos are apparently people who went in search of a treasure said to lie in Ikana's well and were cursed. Pamela's Father attempted to go into the well, and is found partially transformed into one inside the Music Box House, to which he attracted the other Gibdos who sought their "friend." This is backed up by the fact that if Link attempts to enter the Music Box House while the river is still dried up, Pamela thinks that Link is one of the wandering Gibdos outside the house, and tells him to go away, and tells him that "My father is not one of you!".

Gibdos also appear Beneath the Well, where Link must use the Gibdo Mask to communicate with them and find out what it is they require to pass on from the mortal realm and let him pass to the next area. These items are largely regular items that they may once have held dear in life. Gibdos do not attack Link while he is wearing the Gibdo Mask, due to the fact that they mistakenly believe Link to be one of their own. Additionally, they cannot bite Link while he is wearing the Goron Mask or Deku Mask, possibly due to their size differences, or an inability to drain life from rock and wood-based bodies. Zora Link can also dislodge them instantly by activating his bio-electric shield. However, they cannot be tricked by the Garo's Mask, the Captain's Hat, or the Stone Mask. If Link burns the bandages of a Gibdo, it will be revealed to be a ReDead, but it will still react to or ignore the various masks just like it did as a Gibdo, though the ones outside the Music Box House will no longer speak.

If Gibdos are fought conventionally, they should be treated carefully as they can screech multiple times at Link to slow him down consistently. Like ReDeads, their screeches can immobilize Link in midair. Gibdo are immune to Deku Link's bubbles, Deku Nuts, Zora Link's boomerangs, regular arrows, and Ice Arrows, and take half damage from Fire Arrows.

Gibdos are similar in appearance and attack method to their counterparts from Link's Awakening. Their bandages can be burned away with Ember Seeds; however, as their movement patterns are unpredictable and they deal quite a bit of damage upon contact with Link, this often proves to be challenging. Firing Ember Seeds with a game's respective projectile weapon is a viable alternative, and much less dangerous.

Gibdos appear in Vaati's Palace and Talus Cave; they attack Link on sight. They often appear as traps after activating certain switches, but sometimes appear normally.

Additionally, in the 25th Anniversary Edition of Four Swords, Gibdos will attack Link as soon as he is spotted, shooting an object that appears to be mummified as well.

Gibdos are found in the Desert of Doubt. They are unable to paralyze Link. When they are destroyed, they sometimes become Stalfos and enter the Dark World.

Gibdos are similar to their Ocarina of Time counterparts, except that they cannot freeze Link or be frozen. If Link sets one ablaze with the Flame Lantern, their bandages will burn away, revealing themselves to be Stalfos. They are frequently found in the Palace of Winds and Royal Crypt.

Gibdos in this game are very similar to their A Link to the Past counterparts. However, rather than being defeated in a single hit by the Fire Rod, their bandages will burn off, leaving behind a much weaker Stalfos.

Gibdos appear as one-eyed mummies in Tri Force Heroes and like their A Link Between Worlds counterparts, will turn into Stalfos if their bandages are burned off using the Fire Gloves. Additionally there is also a Material item known as Gibdo Bandage which are implied to be the bandages from a Gibdo. According to the Gibdo Bandage's in-game description, Gibdos apparently like to clean like cats.

Gibdos appears as enemy units. They share their Twilight Princess appearance with the ReDead Knights, the difference being that ReDead Knights have the appearance of being on fire and drop different materials. In addition to their paralyzing scream, they can also produce a putrid toxic gas. They are vulnerable to the Bow/Sacred Bow during one of their attacks and if hit with an arrow or light arrows during it they will be knocked off balance causing them to attack their nearby allies and other enemy units, before exposing their Weak Point gauge.

Dark Gibdo are a Dark shadowy variant of Gibdo that appear as enemies in Adventure Mode. They have the same attacks, weaknesses, and material drops as Gibdos.

Gibdos appear as enemies in two episodes. In the episode "Kiss 'n Tell", a Gibdo disguises itself as a beautiful maiden. Working with Gleeok, the disguised Gibdo pretends to be under attack, in order to draw the attention of Link. However, the maiden is rescued by Princess Zelda instead. Link later appears to fully defeat Gleeok and receives a kiss from the beautiful maiden as a reward, turning him into a frog. Not used to his new form, Link fails to use his sword properly; however, Zelda unwraps the bandages covering Gibdo, defeating it. Gleeok and the Gibdo are later summoned back to Death Mountain by way of Ganon's Evil Jar, reporting to him the success of their mission.

A Gibdo appears as a boss in Sakado. 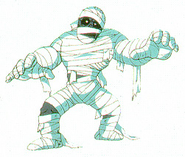 Artwork of a Gibdo from A Link to the Past 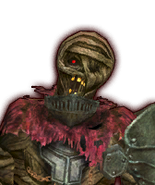 Dialog Box Portrait of a Gibdo from Hyrule Warriors