Zeldapedia
Register
Don't have an account?
Sign In
Advertisement
in: Dragons, The Legend of Zelda: Oracle of Seasons bosses

Gleeok (グリオーク, Guriōku?) is a boss from The Legend of Zelda: Oracle of Seasons. It is the boss of Explorer's Crypt, the seventh dungeon. Similar to its The Legend of Zelda counterpart, Gleeok's first form is that of a huge, two-headed, dragon-like enemy that spits fireballs at Link.

Gleeok sits at the top of the room, between two patches of spikes. Gleeok begins the battle by shooting fireballs at Link. Link must attack its heads to damage it. Once one head is severed, the head will start moving around the room. If the hero takes too long to sever the second head after the first is severed, the first head will grow back. Once both heads are destroyed, Gleeok will be reduced to a skeleton. It will jump to cause an earthquake, stunning Link, then charge him while he is stunned. Link must use the Roc's Cape to jump off the ground as Gleeok is creating the earthquake to avoid being stunned. 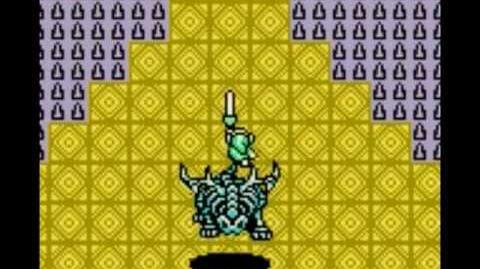