Gleeok (グリオーク, Guriōku?) is a boss from The Legend of Zelda. It is a large, green dragon that inhabits various dungeons. Gleeok has anywhere from two to four heads, each attached to the body by a long neck. These heads detach from the body when they sustain enough damage, and will then fly around the room shooting fireballs at Link. It is possible that Gleeok was inspired by the Lernaen Hydra from Greek mythology.

Gleeok remains stationary for the duration of the battle, but its necks and heads wave around. It shoots fireballs from each head, and these fireballs cannot be blocked even by the Magical Shield. When a head sustains enough damage it detaches from the body, and flies around the room in a random pattern, shooting fireballs. Detached Gleeok heads cannot be damaged or destroyed.

To defeat Gleeok, Link must detach all of its heads while simultaneously avoiding fireballs and flying severed heads. Gleeok is a relatively tough opponent, requiring ten hits with the Wooden Sword to sever the first head, and six hits with the Wooden Sword for each remaining head. After every one of its heads have been detached, Gleeok's body and corresponding flying heads die.

Interestingly, Link is able to walk on Gleeok's body without taking damage; however, since Gleeok's only weak spot is its head, which cannot be reached from atop its body, there is little point in doing so. 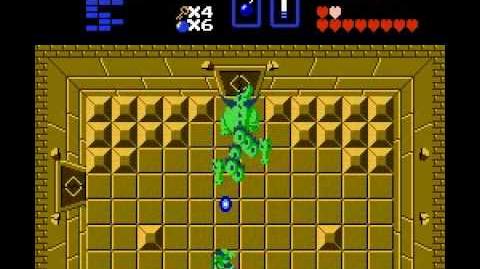 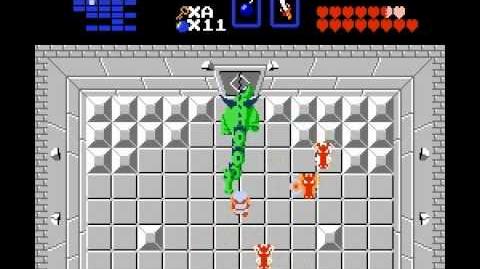 Gleeok makes an appearance in both quests of The Legend of Zelda.

In Level 4, Gleeok makes its first appearance, and has only two heads. It serves as the main boss of the dungeon. All doors to its room will shut until it is defeated. In Level 6, it reappears with three heads. It serves as an optional mini-boss. Link can avoid this fight by bombing the eastern wall in the room before Gleeok's chamber. However, if Link enters the room, all the doors will shut, forcing Link to defeat Gleeok to advance. Finally, in Level 8, it makes its last appearance, this time having four heads. It serves as the main boss. To enter, Link must bomb the connecting wall in either the room to the south or west of Gleeok's chamber.

In the animated series episode "Kiss'n Tell", Gleeok makes an appearance as a large, green and blue three-headed dragon. Ganon sends Gleeok and a Gibdo, disguised as a beautiful maiden, into a forest in Hyrule, near the castle. Gleeok pretends to be attacking the maiden to lure Link into fighting him. Instead, it is Princess Zelda who comes to the maiden's aid, as Link was sleeping while Zelda went horseback riding. After Zelda attempts to rescue the maiden, she refuses Zelda's help, claiming that beautiful maidens are supposed to be rescued by handsome heroes, not other beautiful maidens. Just then, Link arrives at the scene and slays Gleeok. The maiden insists on kissing Link to express her gratitude, but as soon as their lips touch, the maiden becomes a Gibdo again, and Link becomes a frog.

Link: The Faces of Evil

Gleeok makes an appearance. In the game, Gleeok drops the fat lady's necklace.

Gleeok is a keeper of a heat crystal. Gleeok will drop the crystal once it is slain. Bombs are a very effective weapon against Gleeok.

Gleeok is featured as a sticker. Its sticker gives a +20 launch power bonus, and can be applied to anyone.

Retrieved from "https://zelda-archive.fandom.com/wiki/Gleeok_(The_Legend_of_Zelda)?oldid=445598"
Community content is available under CC-BY-SA unless otherwise noted.