"A Gleeok with a hard, rocky shell found in Mount Crenel. Hiding in lava, this beast spews fire on everything it sees."
— Figurine

Gleerok (グリロック, Gurirokku?) is the boss of the Cave of Flames, the second Dungeon in The Legend of Zelda: The Minish Cap. It serves as the guardian for the Fire Element. Its back is vulnerable to blows from the Cane of Pacci, which then renders it defenseless against the slashes of a sword. When it has suffered enough hits, it will sink into the lava and explode. The lava hardens, clearing a path to the Fire Element.

Gleerok is floating in a pool of lava which it can sink into. Link cannot reach its weak spot (the yellow jewel on its back) unless he hits its side with the Cane of Pacci, which makes Gleerok's shell flip over and land on its unprotected back, stunning it. While it is knocked out, Link must walk across its long neck to the exposed jewel and rapidly strike it with the Smith's Sword. When the jewel disappears, Link must run off of Gleerok before it sinks into the lava or take damage from falling in. The lava pit will grow when Gleerok is inside and rocks will fall from the ceiling. Afterwards, the lava pit shrinks again and Gleerok comes out with a new shell. After enough repetitions, Gleerok will be defeated.

Gleerok's attacks are mainly shooting fire out of its mouth. Sometimes Gleerok shoots fire out of its mouth rapidly. If Link is hit by the fire, he will panic and run around extremely fast trying to put out the blaze. If the fire misses Link, the floor will be set alight in tiny patches of fire. These fires can be easily put out by a sword swipe, and have the bonus of sometimes providing Recovery Hearts. Gleerok's fire attacks cannot hit Link if he is in a corner. 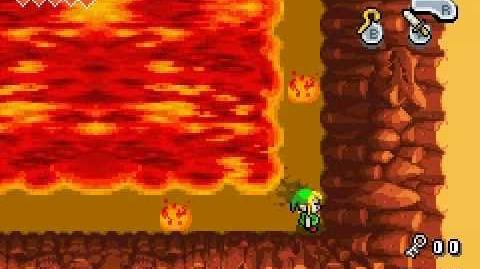 Gleerok is a portmanteau of "Gleeok", a recurring boss in the Legend of Zelda series, and "rock", a reference to Gleerok's hard rock-like shell. Gleerok's Figurine description indicates this as the source of its name, describing it as a type of Gleeok and referencing its rocky shell.

Link fighting Gleerok
Add a photo to this gallery
Retrieved from "https://zelda-archive.fandom.com/wiki/Gleerok?oldid=544535"
Community content is available under CC-BY-SA unless otherwise noted.