Tower of the Gods

"You have done well to find your way to this place. Oh chosen one... Accept this final challenge."
— Gohdan

Gohdan, the Great Arbiter (裁定者ゴードン, Saitei Mono Gōdon?, Ruling Being: Gohdan), is the boss of the Tower of the Gods, the third dungeon in The Legend of Zelda: The Wind Waker. It is a giant stone statue created by the gods of Hyrule for the purpose of guarding the Master Sword and is the final challenge of the Tower of the Gods. It is the only boss in The Wind Waker that is not evil nor Link's enemy.

Gohdan consists of a floating stone head and two disembodied hands which hover around it. The head has a gold-colored crest and two piercing red eyes, in addition to a large nose and mouth. The hands each have one glowing green eye in the center of their palms. The entire head and hands are engulfed in pulsating blue energy. Gohdan is similar in appearance and fighting style to Mazaal and Bongo Bongo. Interestingly, it also bears resemblance to Andross and his robotic form from the Star Fox series. Its hands also strongly resemble Eyerok from the Mario series. He also resembles Tiki Tong from Donkey Kong Country Returns.

It is possible to obtain Gohdan's photo for the Nintendo Gallery sidequest after the boss has been defeated if Link takes a photo of his face that is embedded in the wall from which he appeared when Link fought him.

The Tower of the Gods was created by the gods in order to test the courage of one who would seek the Master Sword. After Link triumphs over the trials of the tower and climbs to the top, the gods speak to him and ask him to accept one final ordeal, namely battling Gohdan. Because of the sacred role of the statue, it is given the title of "The Great Arbiter". Anyone who defeats Gohdan will be deemed worthy of wielding the powerful Master Sword. Although it cannot be confirmed, it seems likely that Link is Gohdan's first and only challenger. When Gohdan was made, it was created to challenge, not defeat, its opponent; it will actually sneeze more arrows or bombs onto the battlefield to aid its challenger, should its challenger run out of them.

Similarly, the boss itself is not meant to be destroyed, and when beaten it will simply retreat to its original position embedded in the chamber wall and become inanimate once again, possibly to wait for another challenger. Once Link had reached this stage, the gods congratulate him and allow him access to the rooftop from which he can travel to the submerged land of Hyrule and claim the Blade of Evil's Bane. Suspended on the wall, Gohdan sneezes out a final gift: a Heart Container (as is the custom of vanquished bosses in the series).

Whether the boss has been imbued with artificial intelligence or whether it is controlled directly by the gods is unclear, but it attacks with surprising dexterity and agility despite its solid and unwieldy appearance. Gohdan attacks firstly with its hands, trying to sweep Link into the electrified gutter surrounding the arena. If Link falls into this trench he is shocked repeatedly and must struggle to clamber back onto the ledge of the combat zone. The Great Arbiter's hands also possess potent crushing attacks, attempting to either squash Link between them or smash him into the ground. Link can temporarily disable a hand by firing two arrows into the eye in its center.

When both hands are disabled at once, Link faces the head itself. If he does not defeat it quickly enough the hands will reactivate and must be disabled again. Gohdan's head can perform a rapid-fire exploding fireball attack. When using this ability, it will close its eyes, rendering itself invulnerable, tilt forwards, open its mouth, and launch a fearsome volley of blasts at Link, turning to follow him around the room if necessary. If Link fights from the doorway where he entered, this fireball attack is the only way he can be hit. To defeat the head, Link must shoot two arrows into each of its eyes to cause it to fall, briefly lifeless, to the ground. Link must then throw a bomb into its gaping mouth to damage it, a strategy also used against Armos Knights. When Gohdan has been hit with three bombs in this manner, it is finally defeated.

When Link runs out of bombs or arrows, Gohdan will sneeze out more for him to collect. This may be a design by the gods to ensure that Gohdan's challenger always has a chance to defeat it. However, while providing these items, Gohdan will also revive its hands and eyes if any of them have been disabled. 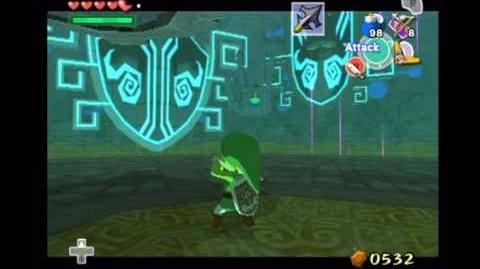 Gohdan's name may be a shortening of the phrase "god hand". The "goh" may be referencing Gohma because like Gohdan, Gohma is usually the boss that requires the game's projectile weapon to be defeated. 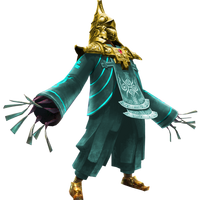 Zant's Standard Outfit (Great Sea) is a Recolor based on Gohdan.