"I have to tell you what I found out! This is terrible! ...Some creature is doing awful things to the great Valoo's tail! That's why he's so angry!"
— Medli

Gohma (ゴーマ, Gōma?) is the boss of Dragon Roost Cavern, the first dungeon in The Legend of Zelda: The Wind Waker. While Gohmas from other games are more similar in appearance to a spider or crab, this Gohma has a considerable number of legs and body segments, creating the illusion of a scorpion or of it having a slight similarity to the Magtail enemies found in the game. Its head features a signature Gohma eye, a bony frill (somewhat similar to that of a real-life triceratops), a pair of massive spiked pincers, and its lava-spewing mouth.

Gohma must be battled once more in Ganon's Tower. A monochrome screen effect appears for the duration of this second battle; an indication of it being a flashback, a hallucination, or Ganondorf sending Link into the past when the bosses were still alive; the monochrome effect seems to be a good indicator of this, as how the entire Hyrule Castle is rendered in greyscale before time is restarted. Further evidence of this theory includes the fact that only items that could possibly have been collected up until the initial battle with Gohma are available in this battle.

While in past games, killing Gohma focused entirely on shooting projectiles into its eye, in The Wind Waker, Link cannot damage it until halfway through. With the newly acquired Grappling Hook, he must first grapple onto the swinging tail of Valoo, which is hanging through a hole in the ceiling. Once attached, Link can swing across the room, causing the dried lava on the roof to come loose, crashing down onto Gohma, damaging its exoskeleton. Gohma will quickly rise again, resealing Valoo's tail with more dried lava, allowing Link to repeat the process. Link can swing up onto platforms jutting out from the walls to protect himself from the beast's attacks, but this usually results in Gohma breathing fire on Link and burning him.

Once repeated several times, the shell will eventually break, exposing Gohma's vulnerable body. Now lacking proper defense, Gohma will attempt to body slam Link, bringing its characteristic eye within Link's sword range. Link can also use the Grappling Hook to pull Gohma close enough to attack. Once Gohma has sustained enough damage, it will be defeated. Interestingly, if Link falls into the lava at the beginning of the cut scene involving Gohma's death, he can be seen bouncing across the pit all through the cut scene. The monochrome battle is virtually the same, but now that the Master Sword is in Link's possession Gohma is killed in fewer hits, and the boss music has been distorted rather heavily. 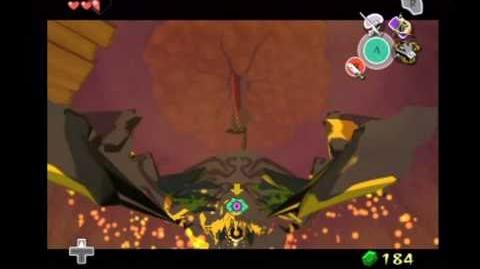 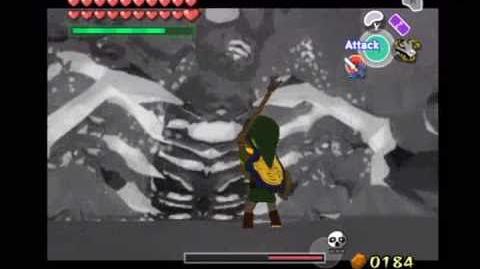 Retrieved from "https://zelda-archive.fandom.com/wiki/Gohma_(The_Wind_Waker)?oldid=528896"
Community content is available under CC-BY-SA unless otherwise noted.