Throwing bombs
Kick you
Give you an electric shock

"Hurry! Chase after it. Even if it means throwing your own body into it, do it so it'll stop!"
— Tatl

Despite its name, Goht resembles a bull moreso than a goat, standing over thirty or forty feet tall at the shoulder. Its body is plated with thick blue and orange armor, with multiple thick cogs and mechanical tubes visible between the seams. Its "head" consists of a largely featureless orange wedge with two large curved horns, and a tiny face on its forehead resembling a stern, elderly man.

When Link arrives in the boss room, the gargantuan Goht is encased in a block of ice. Link must melt the ice with a Fire Arrow, thawing the ice and releasing the enraged Goht. In the original Japanese version, Goht will run past Link during the opening cut scene, while in localized versions, it knocks Link down as it charges.

Upon its defeat, Link retrieves Goht's Remains and a Heart Container. The second Giant is also released. The curse of perpetual winter is ended, and spring returns to Snowhead, also lifting the curse on Biggoron.

To defeat it, Link can transform into his Goron form and roll into it at full power, causing the magical spikes to damage the bull. There are green jars throughout the room that will partially refill Link's magic meter when he runs into them, and will later reappear. This allows Link to keep up the chase indefinitely, even though his full power roll consumes magic. If Goron Link is able to jump while rolling by using part of the terrain as a ramp, he can hit Goht higher up on its body. If done correctly this will knock Goht down, and he will be immobile and temporarily vulnerable to attack.

Hitting Goht with a bomb, including by leaving one in its path for it to run over, will also cause it to fall down. It is also possible for Link to defeat Goht by shooting arrows or other projectiles at it. The entrance to the arena and the slopes on the outer wall are good vantage points for this as Goht will not run over these areas. However, methods of attack other than rolling present complications; Goht runs around the entire room, giving Link only a small window to inflict damage as it passes, sometimes stops to shoot lightning when Link is far away, and can turn around if it is not being pursued.

After taking enough damage, sparks can be seen on Goht, implying that it runs on electricity. When it has been damaged enough, Goht will malfunction and run into a wall, causing part of the wall to fall down and bury it under rocks.

In the 3DS remake Goht must be stunned (done in the same way he was normally damaged in the original) to get him to collapse and expose a giant eye on his back, which is now his weakness. Link must attack the eye until Goht gets back up to damage him. 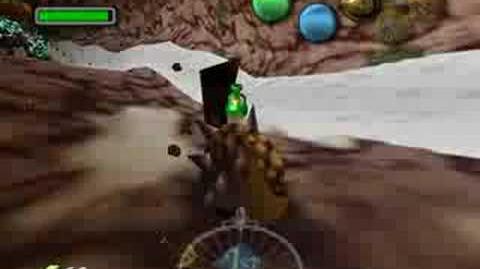 Goht appears in the official Majora's Mask manga as well. Its story differs slightly from the game as it resides outside Snowhead Temple rather than being frozen inside it and is attributed with Darmani's death.

When Link goes to fight Goht in Darmani's stead, he uses Darmani's strength to stop the charging Goht and throw it off the side of the mountain, taking its remains and freeing the second Giant in the process.

Retrieved from "https://zelda-archive.fandom.com/wiki/Goht?oldid=538559"
Community content is available under CC-BY-SA unless otherwise noted.