Zeldapedia
Register
Don't have an account?
Sign In
Advertisement
in: Islands, The Legend of Zelda: Phantom Hourglass locations
English

World of the Ocean King

Goron Island is a location from The Legend of Zelda: Phantom Hourglass. It is a very large island in the Southeastern Sea. It is the home of the Goron race in the World of the Ocean King. This island resembles a large, curled-up Goron if viewed from the sea. A shop can be found here, selling Bombchus, and Yellow and Purple Potions.

Link, Ciela, and Linebeck travel to the island in search of a Pure Metal to forge the Phantom Sword. They must first dispatch the Sky Whale, which lurks in the waters surrounding Goron Island. After defeating the beast, the trio can proceed to the island. There, they go to Biggoron, the island elder, to inquire about the Pure Metal; however, he refuses to speak of the Pure Metal to an outsider. He instructs Link and Ciela to speak to every Goron on the island to become a member of the tribe. Having done this, Link and Ciela go back to Biggoron, who quizzes them on Goron life with a game of questions. After answering a question right, Link receives a prize, adding up collectively to 146 Rupees and a Wisdom Gem after answering all six questions correctly. Biggoron then declares Link a member of the Goron tribe and requests 146 Rupees as a one-time fee for becoming an official member.

Biggoron instructs his son, Gongoron, to lead Link to the Goron Temple where the Pure Metal is hidden. But Gongoron refuses to acknowledge Link as a member of the Goron tribe and runs away to the temple. Link follows him, and, after journeying through a maze and making his way through part of the temple, finds Gongoron imprisoned. Link frees him, and Gongoron apologizes to him for running away. Later, they defeat Dongorongo, the boss of the temple, and Link gets the Crimsonine, the island's Pure Metal. Biggoron and the others will congratulate Link, and give him a Huge Red Rupee for removing Dongorongo from their temple. 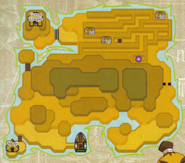 A map of Goron Island
Español
Community content is available under CC-BY-SA unless otherwise noted.
Advertisement