Link of the Gorons
Goron Shop

"You got a Goron Tunic! This heat-resistant tunic is adult size, so it won't fit a kid... Going to a hot place? No worry!"
— In-game description

The Goron Tunic is an item from The Legend of Zelda: Ocarina of Time. This tunic is nearly identical in appearance to Link's traditional green Kokiri Tunic and blue Zora Tunic, except with a distinct red coloring. The Goron Tunic allows Link to survive in very hot areas through unexplained means, though it is made clear that it is, at least to a degree, fireproof. It may only be worn when Link is an adult.

The Goron Tunic's primary purpose is enabling Link to withstand the immense heat of the Death Mountain Crater and the Fire Temple without fainting. It may also be used to slow down the damaging effects of lava and fire, as well as some other hazards, such as the poisonous water in the Royal Family's Tomb and the Shadow Temple, as well as the floor spikes also found in the latter area.

The Goron Tunic can be obtained in a variety of ways. If Link stops the rolling Goron in Goron City with a well-placed Bomb or Bombchu, the young Goron reveals himself to be Darunia's son and gives Link the Goron Tunic. The tunic can also be purchased at the Goron Shop for 200 Rupees. The tunic may be lost if Link is swallowed by a Like Like. However, Link can reclaim it by quickly killing the Like Like; the alternative is purchasing a new one at the Goron Shop.

A tunic that is red in color can be chosen as an alternate form of Link's tunic in the Super Smash Bros. and Soulcalibur II games. It can be presumed that this is the Goron Tunic; however, it has no special properties.

In the manga for Ocarina of Time, Link wears the Goron Tunic while fighting Volvagia. Sheik mentions that he would have died if it were not for the "goron clothing" he was wearing. However, because the manga is black and white, the color of the tunic cannot be seen. 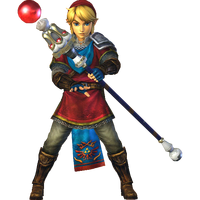 The Goron Tunic appears as a red recolor of Link's standard outfit however like the red tunics in Super Smash Bros. and Soulcalibur II it has no special properties and is purely cosmetic. Unlike most other Recolors, it is simply referred to as the Goron Tunic. It can be unlocked by completing all Reward Maps (excluding DLC) scenarios (Reward Maps are special Adventure Mode maps unlocked by completing Illustration Pieces).

The Goron Tunic from Ocarina of Time appears as three badges (Goron Tunic I, Goron Tunic II, and Goron Tunic III) that can be crafted at the Bazaar's Badge Market. Each badge reduces damage taken on fire-element-recommended stages.