Zeldapedia
Register
Don't have an account?
Sign In
Advertisement
in: The Legend of Zelda: Majora's Mask bosses, Fish
English

Knocking you
Sucking you into his mouth

Upon reaching the final chamber of Great Bay Temple, Link encounters Gyorg. After its defeat, the vortex surrounding Great Bay Temple disappears, and the pollution that is plaguing the waters of Great Bay ceases, such that the murky waters will eventually clear. Link obtains Gyorg's Remains, and meets the third of the Four Giants, who is free thanks to the defeat of Gyorg.

The battle takes place in a large room filled with water, with a single round platform in the center. While Link is on the platform, Gyorg will attack by leaping over the platform, or swimming onto it in an attempt to grab Link in its jaws. It will also ram the platform in an attempt to knock Link off, which he can avoid by jumping just before Gyorg hits. When Link is in the water, Gyorg will pursue him and try to suck him into its mouth, chewing on and dealing considerable damage before spitting him back out. Unlike the grappling attacks of most enemies, Link can not escape from Gyorg's bite via Zora Link's electric barrier.

To damage Gyorg, Link must first stun it, which can be accomplished with a variety of items, though Arrows or the Zora form's boomerangs are most effective. Once stunned, it will stop swimming and sink, and can only be damaged by one of Zora Link's abilities. Alternatively, if Link has Fierce Deity's Mask, its sword beams can be used to easily damage Gyorg from the platform. After taking a single hit, Gyorg will go back to attacking. Once Gyorg has taken enough damage, it will release a swarm of smaller Gyorg like fish from its mouth, possibly its offspring. They will swim after Link in order to attack, but can be easily dispatched by Zora Link's electric barrier or other forms of attack.

Unlike most enemies and bosses, after its defeat, Gyorg does not burst into flames or explode. Instead, it jumps on the platform and splashes around helplessly, all the while leaking small puddles of water until it shrinks into nothing. After Gyorg has disappeared, Link collects his remains and a Heart Container. The third Giant is freed, and the curse on Great Bay, which had been polluting the water and surrounding Great Bay Temple with a vortex, is lifted.

Gyorg received significant changes in the 3DS remake, with the addition of a second phase. The first phase is identical to the original fight, except after being stunned Gyorg will float up and expose a large orange eye that Link must attack. After the eye is damaged significantly, Gyorg will sink the platform forcing Link to don the Zora Mask to continue, and sea mines attached to chains rise up from the floor. Gyorg will attack Link by ramming him, spawning schools of small fish from its mouth, and attempting to suck him into its mouth. To expose Gyorg's eye, Link must now use his Zora Boomerangs or force field to break the chains holding the mines in place and trick Gyorg into swallowing them with its inhale attack.

„Gyorg“ may be derived from the Japanese word Gyo, meaning "fish". 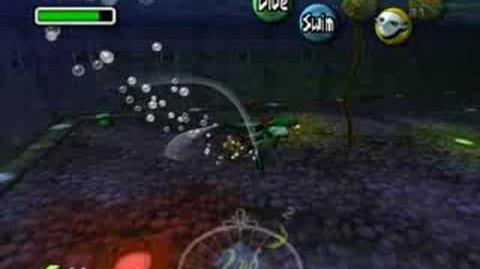