Zeldapedia
Register
Don't have an account?
Sign In
Advertisement
in: Articles with non-canonical information, Hammers, Zelda II: The Adventure of Link items,
and 5 more

Breaking rocks and other obstacles

"You got a hammer! It's small, but it packs a punch!"
— In-game description

The Hammer is a recurring item in the Legend of Zelda series, useful for destroying obstacles and defeating enemies.

Link finds it at Spectacle Rock. It is one of only two items found outside dungeons and is used to destroy Boulders. There are a total of four boulders in the game. One is beside the Town of Rauru, another leads to the Harbor Town of Mido, one is in front of the cave that contains the Water of Life and the last is beside Spectacle Rock that leads to a cave containing a Magic Container. It can also be used to destroy forest tiles and is used when finding the Hidden Town of Kasuto.

Though the Hammer does not appear as a weapon used by Link himself, he can control the Hammer Guardian Statues that appear in the Temple of Time with the Dominion Rod, which allows him to manipulate them into using their Hammers to attack enemies with while he is guiding them through the temple.

This weapon is obtained in Mutoh's Temple, and is needed for Link to defeat the boss there, Eox. When the Hammer is selected, Ciela always carries it, even if Leaf or Neri is equipped, extending its range beyond Link. Tapping the stylus on the screen selects where the Hammer will hit. The hammer can be charged by holding it in midair for a few seconds, when fully charged, it noticeably doubles in size. The Hammer is the only way to smash in rusty Foot Switches, as Link's weight alone cannot push them in. The Hammer is very useful in combat, and can even stun Phantoms when fully charged. Inside Mutoh's Temple exclusively, the hammer is used to solve puzzles on the floor involving colored tiles. It is perhaps the strongest weapon in Link's arsenal, able to take down enemies such as Zora Warriors in one powered-up strike.

The Hammer appears as an item in the game. It can stun enemies and pound stakes into the ground. It is the main item of the Tower of Hera and can be bought or rented at Ravio's Shop. If Link brings ten Lost Maiamais to Mother Maiamai, she can upgrade the Hammer into the Nice Hammer. The Hammer can crush most enemies but like Link's sword, it won't work on some foes including Buzzblobs and Bari.

The Hammer appears in Tri Force Heroes, and can be found on Item Podiums. It creates small shock waves that can stun opponents, and if struck directly, some enemies will be instantly defeated. Wearing the Hammerwear increases the size and power of the hammer, creating more powerful shock waves and can defeat even more powerful enemies.

Hammers are effective weapons to use against all varieties of Stone Pebblits and Talus. In addition to Ore Deposits, Hammers can break metal or wooden crates, Barrels, and Pots. Like most two-handed weapons, Link will perform a Great Spin Attack as a Charged Attack when wielding hammers and their sheer weight can knock enemies off their feet. The Spring-Loaded Hammers are designed to provide extra knockback, though with the cost of having low attack power, though has high durability and can be wielded in conjunction with a Shield as it is a single-handed weapon. 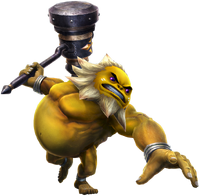 The Hammer appears as a weapon type used by the Sage of Fire, Darunia as his default weapon type. Darunia's use of a Hammer as a weapon is a reference to his legendary ancestor, the Hero of the Gorons who used the mighty Megaton Hammer to defeat the Goron eating dragon, Volvagia. Fitting his role as the Sage of Fire, the Hammer has a Fire Elemental Attribute and in addition to pounding enemies. Along with Darunia's Hammer weapons, Zelda can summon Hammer Guardian Statue and command it with the Dominion Rod to use its Hammer to attack enemies as part of her Dominion Rod.

"With a hammer you can press a switch to trigger various events. You can also attack certain foes."
— Tutorial description 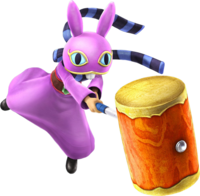 The Hammer appears as a new item obtained in story mode and is used to fight Helmaroc King. It can be found in a Treasure Chest located in Wind Waker: A New Disturbance story scenario in the Forsaken Fortress stage. In order to access it, Link and/or Tetra must capture the Bomb Shop keep, which will open a gate that leads to a small alcove containing the chest. In addition to damaging and attacking enemies, it can also be used to activate Hammer Switches to activate certain devices.

Its Item Power-Up is the Upgraded Hammer. The Skull Hammer from The Wind Waker also appears as an Item Card on the Great Sea Adventure Mode map. 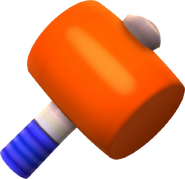 The Hammer from A Link Between Worlds