"A harp that commands magical melodies. It can be imbued with elemental affinity using Combo Attacks. Use the Strong Attack button to tap into elemental powers and cause various effects."
— In-game description

Harp is the default weapon moveset used by Sheik in Hyrule Warriors. It is described as a Harp that commands magical melodies and can be imbued with elemental affinity using Combo Attack. Using its Strong Attack allows Sheik to tap into elemental powers and cause various effects. As part of its move set, during certain combos, Sheik will also throw kunai.

Its default Level 1 weapon is the legendary Goddess's Harp from The Legend of Zelda: Skyward Sword. Interestingly, Zelda can be seen playing the Goddess's Harp it at least two cutscenes.

Each Elemental Affinity imbued by combos allows Sheik to play magic melodies with her Strong Attack that allow her to produce a variety effects. The six melodies are all songs Link can learn in The Legend of Zelda: Ocarina of Time. 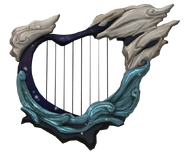 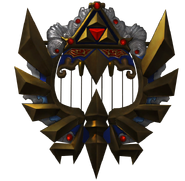