Head Thwomp (グルン, Gurun?) is the boss of the Wing Dungeon, the second dungeon in The Legend of Zelda: Oracle of Ages. It is a superior Thwomp that attacks Link using a slamming attack. Head Thwomp is a floating rock that spins, alternating between purple, blue, green and red faces. As it spins, it periodically shoots out large fireballs and bombs. The only way to defeat Head Thwomp is to throw bombs into the top of it; however, the way the bomb affects it depends on which face is showing. It is the only boss fought in the two-dimensional platform system found in the game.

Once Link enters the boss room, Head Thwomp's head will start alternating between its faces. Occasionally, it will shoot fireballs and bombs out of the top of its head. These bombs can be picked up to replenish Link's supply. Link must use the Roc's Feather to jump onto the rotating platforms that are positioned around it, and he then has to throw a bomb into the open top situated above the "face" of the boss. Alternatively, he could equip the Toss Ring and throw bombs from the top of the ladder, but possession of said ring is dependent on game being password linked. Once the bomb is inside, Head Thwomp will start spinning violently, eventually stopping on the face that was displayed the exact moment the bomb was thrown into it.

Each time Head Thwomp sustains damage, the heads will alternate a little faster. Once Head Thwomp has taken damage four times, it will fall to the ground and fade away, defeated. Link can then obtain the Ancient Wood. 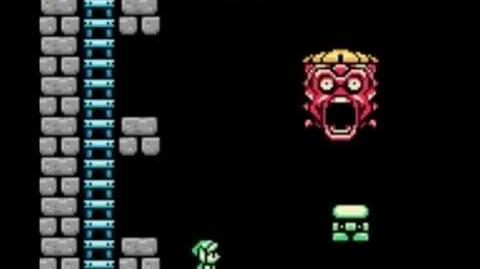 Retrieved from "https://zelda-archive.fandom.com/wiki/Head_Thwomp?oldid=482940"
Community content is available under CC-BY-SA unless otherwise noted.