Zeldapedia
Register
Don't have an account?
Sign In
Advertisement
in: Kings, The Legend of Zelda: The Wind Waker bosses

"There you go... Acting before you think, as usual... I swear! Do you even realize that we had to draw that monster bird off for you? It was about to come flying in here after you again!"
— Tetra

The Monstrous Helmaroc King (大怪鳥ジークロック, Dai Kaichō Jīkurokku?, Great Ominous Bird Siegroc) is a boss from The Legend of Zelda: The Wind Waker. He is an exceptionally large Kargaroc who wears a hard steel mask which can be destroyed using the Skull Hammer. While he is wearing the mask his eyes are shown yellow; however, while fighting him without the mask they are shown as being red, possibly because the monster's mask has protective lenses over the eyes. He serves Ganondorf in the Forsaken Fortress.

Once at the top, the floor begins to shut itself, and the Helmaroc King reappears just before it completely closes. He now attacks using forceful winds to drive Link into spikes, by stomping around if Link gets too close to its feet, and by using a very powerful peck. However, when he misses his peck, his beak is stuck in the ground for some time. This is Link's opportunity to smash the mask with the Skull Hammer. The Helmaroc King will also quickly fly by Link and rake his talons across the ground, an attack which can be dodged by running out of the way, or by standing between his talons as he charges. Humorously, when the Helmaroc King uses this quick gliding attack, it may occasionally slam head first into the side of the pirate ship atop the fortress. After smashing the mask four times, it breaks, revealing an almost rooster-like comb, which is his weak point. The fight continues in the same way, except its head is now vulnerable to the Master Sword as well as the Skull Hammer and Arrows. Even the Boomerang and the Grappling Hook are capable of damaging him. 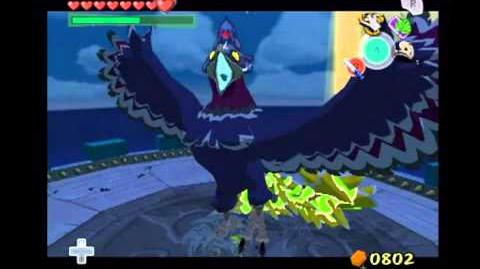 "Helmaroc" is likely a portmanteau of helmet, referring to the protective headgear it wears, and Roc, a giant bird of Persian mythology.

Artwork of Link's battle with the Helmaroc King
Community content is available under CC-BY-SA unless otherwise noted.
Advertisement