Hinox (ヒノックス, Hinokkusu?) are recurring enemies in the Legend of Zelda series. They are a hulking, muscular race, with one huge eye, similar to the Cyclops of ancient Greek Mythology. They are not known for their intelligence, but more for their love of tossing Bombs.

Hinox first appear as enemies in the Dark World. They are incredibly powerful and can deal a lot of damage with their bombs. Regular weapons will not easily defeat them, but they are very vulnerable to their own weapon. The bombs they throw at Link can be thrown back at them, or Link can use his own bombs.

Several Hinox serve as mini-bosses in various dungeons. One is the mini-boss of the Bottle Grotto, the second dungeon of Koholint Island. Hinox also appear in Eagle's Tower and Turtle Rock. Hinox can be easily defeated with Spin Attacks and careful dodging of the bombs they throw. If Link gets too close they can pick him up and throw him, sometimes into holes.

Hinox can be found in the Death Mountain Foothills. They are very dangerous enemies, dealing great amounts of damage if they hit Link. If a Hinox grabs Link, it will shake him, causing him to spill hundreds of Force Gems. If this happens, Tingle will appear to try to recover the spilt Force Gems. They can also attack by throwing boulders at Link.

The Hinox are blue and can occasionally be found in groups of two on Dee Ess Island and Goron Island. If Link throws a bomb at a Hinox, it will throw it back. Attempts to strike it with a sword without first stunning it will result in a series of hard punches, knocking Link to the ground. To defeat a Hinox, Link must first shoot its large eye with an arrow and then attack it while it is stunned. Once the arrow falls out of its eye, the Hinox will become aggressive again.

The Hinox in A Link Between Worlds perform much of the same duties as in A Link to the Past. However, if Link gets close enough to a Hinox, they may ram Link. This attack is very deadly because Link will lose four full Hearts in total if hit by charge. The Blue Mail is very useful against them because in Hero Mode, Hinox deal 8 full Hearts of health. The Death Mountain variety wear a winter coat and throw snowballs that freeze Link if contacted for a few seconds and do damage.

There is one Hinox hiding in a cave behind a waterfall in northeastern Lorule. He will bribe Link to keep his location a secret. Link has the option of continuing to pressure him for more money, until he loses his temper and attacks in a berserker rage.

Hinox appear as enemies in Tri Force Heroes. They are an exact copy of the ones in A Link Between Worlds, with the exception of having more health for the three heroes to fight.

"The largest monster to make its home in Hyrule, the Hinox lives primarily in forested areas. A keen awareness of your surroundings is paramount when facing one, as Hinox are known for tearing entire trees from the ground and using them as weapons. A deft hand can steal weapons off the necklaces they wear."
— Hyrule Compendium

In Breath of the Wild, Hinox are mini-bosses redesigned to resemble giant cyclops-like Blins. There are four variants, the eponymous red-skinned Hinox, the Blue Hinox, the strongest Black Hinox and the undead Stalnox. Including all variants, there are a total of forty Hinox specimens found throughout Hyrule. After completing the main story and defeating each of those forty Hinox, Link can obtain the Medal of Honor: Hinox from Kilton.

Unlike past games, eponymous red Hinox and Blue Hinox do not use Bombs or explosives of any kind though Black Hinox and Stalnox have the ability to dig up Bomb Barrels from any surface their standing on from solid ground to wooden bridges. Black Hinox and Stalnox will throw these Bomb Barrels as makeshift Bombs in typical Hinox fashion. Hinox and Blue Hinox however possess a similar ability to dig up rocks and throw them in the same manner. All Hinox varients will uproot nearby trees and use their fallen logs as makeshift weapons though only trees that can be normally cut down. They can also pick up fallen logs as well. Stalnox can remove their ribs, arm bone, or jawbone as makeshift weapons as well though Link cannot equip any of them due to their sheer size and as a result Stalnox are the only Stal varient to lack a coresponding arm bone weapon. Hinox are occasionally referred to as giants in Breath of the Wild due to their size.

Hinox wear weapons and bows on their necklaces as jewelry, which Link can obtain by climbing or paragliding onto them while they are sleeping. These weapons will also be dropped upon defeat, as well as a variety of materials, including teeth, toenails, guts, and various fruits. In Master Mode, all red Hinox are upgraded to blue, except the Youngest Kin fought during the Shrine quest "The Three Giant Brothers". 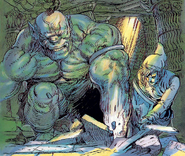 Artwork of Link battling a Hinox from Link's Awakening

Hinox from Breath of the Wild 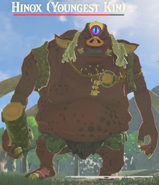 Hyrule Compendium entry for a Stalnox in Breath of the Wild