"You got the Hover Boots! With these mysterious boots you can hover above the ground. The downside? No traction! You can even use these to walk for short periods where there is no solid ground. Be brave and trust in the boots!"
— In-game description

The Hover Boots are an item from The Legend of Zelda: Ocarina of Time. These sacred boots are fitted with goldwork and feature small, decorative wings on the heels, similar to the sandals of Hermes, the Greek messenger god. Their appearance is similar to that of the Boots from Zelda II: The Adventure of Link and the Pegasus Boots.

Their main purpose is to allow Link to walk on water or thin air for a few seconds and thereby cross otherwise impassable pitfalls. This useful, and sometimes necessary ability, is offset by the fact that the boots maintain rather poor traction while on solid ground. The Hover Boots are obtained after defeating Dead Hand in the Shadow Temple.

Since the Hover Boots only work a brief moment, their practical use is rather limited. However, they feature several other, less obvious, benefits that are apparent from time to time, the most notable of which is the fact that Link, while hovering, can easily change direction in mid-air, an ability that is much more limited while simply jumping. The boots also reduce Link's weight, which keeps him from sinking in quicksand, weight-sensitive platforms and, in rare cases, allows him to foil certain pressure-sensitive traps.

In the Nintendo 3DS re-release the Hover Boots can be equipped as an item rather than accessing the equipment subscreen. This was done to follow suit with the change for the Iron Boots to make equipping these items easier and quicker than they originally were. 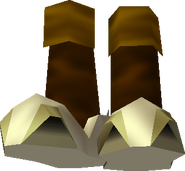 Render of the Hover Boots from Ocarina of Time