Zeldapedia
Register
Don't have an account?
Sign In
Advertisement
in: Humans, Zelda II: The Adventure of Link races, The Legend of Zelda: A Link to the Past races,
and 10 more
English

This article is about the race. For the general group of races, see Human.

The Humans are a recurring non-specific race in the Legend of Zelda series. They are human peoples who do not have a specific or known race contrary to the Hylians or the Gerudo. They include in particular the round-eared non-Hylian humans.

The round eared humans live in Hyrule during the time of A Link to the Past, The Wind Waker, and Twilight Princess. These non-Hylian humans are only distinguishable from Hylians by their short, rounded ears, as opposed to the long, pointed ears of the Hylians.

Labrynna and Holodrum's human population seems to be mostly composed of round eared humans with occasional hylians. The exact differences between round eared humans and Hylians has yet to be clarified in the series; occasionally normally Hylian characters such as Malon are portrayed with round ears such as in Oracle of Seasons.

The Kingdom of Hytopia is mostly composed of round eared humans, with Hylians believed to be one of the legendary heroes foretold of in the prophecy.

Although non-Hylian humans come to populate many areas of the world, one notable population lives in a secluded village in the Ordona Province in the deep south of Hyrule, where the start of the game Twilight Princess takes place. At this time, there are very few non-Hylian humans in Hyrule that are not originally from Ordona, which may indicate that the Ordonians are the progenitors of the entire race.

Round Eared Humans appear to possess a variety of abilities similar to Hylians. Some humans such as the Ordonians seem to rely more on their intelligence and ingenuity. For example, in his youth Mayor Bo manage defeat the Goron Gor Coron in Sumo, by wearing Iron Boots in order to match a Goron's natural heaviness. Humans such as Rusl, Colin, and Jaggle are shown to be capable craftsman, able to construct tools and weaponry such as the Fishing Rod, Ordon Sword, and Ordon Shield, while Barnes is shown to have skill in Bomb making. Ashei, Mayor Bo, and Rusl are shown to have some fighting skill (Ashei is a capable archer, Mayor Bo has a talent for Sumo, and Rusl is a swordsman who trained Link in the art of swordsmanship).

Others such as Syrup, Maple, Vasu, Patch, Madam Couture, and The Lady possess magical powers. 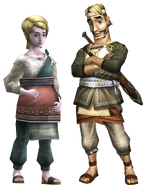