Inside Ganon's Castle is the final dungeon of The Legend of Zelda: Ocarina of Time. This dungeon is located within Ganon's Castle, hence the name. Ganondorf's final stronghold, Ganon's Tower, is located at the very center of the castle; entrance to the tower may only be gained when the Six Evil Barriers have been destroyed.

After Link rescues the sixth sage, Rauru tells Link to go to the Temple of Time, where someone important waits for him. Link arrives there, and encounters Sheik, who uses the power of the Triforce of Wisdom to reveal "his" true identity: Princess Zelda, the seventh Sage destined to lead them. She presents him with the Light Arrow, the only weapon with the power to defeat Ganondorf. However, the voice of Ganondorf himself is suddenly heard, revealing that he had been watching Link all along, biding his time until Link was reunited with Zelda. He seals Zelda inside a crystal prison and spirits her away to his castle, gloatingly challenging Link to a final confrontation.

The Six Sages create for Link a path to Ganon's Castle, wherein he destroys the Six Evil Barriers protecting Ganon's Tower, each corresponding to a temple and its guardian sage. At the top of the tower, Link defeats Ganondorf by deflecting his own magic back at him. With the last of his strength, the wounded Ganondorf attempts to bring the castle down upon Link and Zelda. They manage to escape before the tower collapses; as they celebrate their victory, however, a sound is heard from the ruins of the castle. Link approaches the rubble, from which Ganondorf erupts and invokes the power of the Triforce of Power to transform himself into Ganon, a mighty beastly form that towers over Link.

Ganon summons a wall of fire encircling the battlefield, and manages to knock the Master Sword out from the hands of the Hero of Time, causing it to fall outside the barrier, out of Link's reach. The hero uses his other weapons and tools to sufficiently damage Ganon to the point where the wall of fire is temporarily lowered, enabling him to retrieve his sword. Link's attacks severely weaken Ganon, at which point Zelda uses her power to lower his defenses. Link delivers the final blow to Ganon, who is sealed away by the Seven Sages. With the threat of Ganondorf removed and the land of Hyrule made safe, Zelda uses the Ocarina of Time to send Link back in time to when he was a child, in order to live the life that had been taken away from him when he was sealed away for seven years.

To reach the Fire Barrier, Link must collect the Silver Rupees in the previous room while avoiding falling into the lava. Link must have obtained the Golden Gauntlets from the Shadow Barrier in order to complete this task. After all the Rupees have been collected, the door opens, and remains open, even if the time runs out. The narrow walkway that dominates the room will gradually sink as Link walks on it unless he has equipped the Hover Boots.

After firing a Light Arrow at the Fire Barrier in the next room, Darunia appears, dispels the barrier, and sends Link back to the entrance.

In the first room, there are five Torches that must be lit to open the door. There are also enemies that, if defeated, cause a Treasure Chest to appear.

In the next room, Link must collect all the Silver Rupees from platforms while avoiding the pits in the ground and the Beamos on various platforms. After collecting all of them, the door to the Forest Barrier opens. After shooting it with a Light Arrow, Saria dispels the barrier and sends Link back to the entrance.

In order to access this room, Link must pick up the giant statue with the Golden Gauntlets. Inside, Link must kill all the invisible enemies to earn a Small Key.

The next room contains a Triforce symbol on the floor. When Link plays "Zelda's Lullaby", Link earns a Small Key, unlocking the next room. Link must then collect all the Silver Rupees within a minute avoiding two boulders.

The final room contains an invisible wall. On one side, a Wallmaster lurks where the Barrier would be in the other 5 five rooms. The Light Barrier lies on the other side of the invisible wall. After shooting it with a Light Arrow, Rauru dispels the barrier and sends Link back to the entrance.

In the first room Link must shoot a Fire Arrow at the torch to his right, causing a glass-like platform to appear. After crossing it to the rectangular platform and avoiding the Green Bubble, Link will be faced with a Like Like. Using the Lens of Truth to follow the invisible path, Link can use the Megaton Hammer to activate a switch, causing the door to open. Activating the non-rusty switch will cause the chest that contains the Golden Gauntlets to appear. Link must then grapple to the chest and use the Lens of Truth to follow the invisible path that leads to the door.

The next room contains the Shadow Barrier. After shooting it with a Light Arrow, Impa dispels the barrier and sends Link back to the entrance.

Link must collect all the Silver Rupees in the first room, while avoiding Blade Traps and a Beamos and dragging Armos Statues. In the second room Link must use a Bombchu to activate the diamond-shaped switch behind the metal bars.

In the next room, Link must shoot a Fire Arrow at the spiderweb on the ceiling to flood the room with Sunlight. Using the Mirror Shield on the correct sun icon will open the door. If Link shines light on the incorrect sun icon, a Wallmaster will drop down.

The final room holds the Spirit Barrier. When shot with a Light Arrow, Nabooru dispels the barrier and returns Link to the entrance.

In the first room, Link must defeat all the enemies to open the door and then use Blue Fire to melt the Red Ice covering the exit.

The next room contains a puzzle, in which Link must use the Ice Blocks to escape the room within two minutes. To open the door, he must activate the rusted switch behind a wall of Red Ice.

The final room contains the Water Barrier, which must be shot with a Light Arrow. Princess Ruto appears, dispels the barrier, and sends Link back to the entrance.

"Link...can you hear me? It's Rauru, the Sage. We six will gather our power to create a bridge to the castle where Ganondorf dwells... The castle's keep, which is known as Ganon's Tower, is protected by six evil barriers. Bring down the six barriers and save Princess Zelda!!"
— Rauru

At the last floor Link finds Ganondorf playing an organ and Princess Zelda imprisoned. The hero must fight Ganondorf. Once defeated, the tower will start to rumble, and Link, Princess Zelda and Navi must run down the tower within a time limit. There are certain locked doors that require Zelda to unlock, and Link must defeat enemies on the way to allow Zelda to advance safely. When they reach the ground, the castle will collapse completely.

From among the rubble, Ganondorf revives himself as the Dark Beast Ganon. Link defeats him with the Master Sword and the Seven Sages then seal him in the Sacred Realm.

In the Master Quest re-releases, several changes have been made to the dungeon, including puzzles and the order in which rooms are visited. The Golden Gauntlets are now found in the Spirit section. There are many more Silver Rupee puzzles as well as more Beamos, Iron Knuckles, Stalfos and Dinolfos. The Light and Water sections require Link to collect several Small Keys from the Forest and Spirit sections. The Water section contains all four types of Keese including invisible Keese. Other new enemies include Armos, Gibdos and an Infinite Hand.

Inside the castle the barriers part is completely skipped and Link goes directly to the tower. Everything else is very close to the game, except for dialogue and the fact that Ganondorf briefly uses a sword in the tower battle. In addition, Ganondorf's earthquake punch is downplayed to simply cracking the floor rather than causing pieces of it to fall to the room below. After the castle collapsed, and Ganondorf transforms into Ganon, Ganon ends up beating Link up, and Zelda manages to touch the Master Sword briefly to throw it to Link so he can have an even fighting chance against Ganondorf, to which Link eventually manages to cut Ganon's tail off, and later bring him down with a vertical slash before landing the final blow by impaling his face.

Although Ganon's Castle is not mentioned or shown in the manga itself, the final battle scene with Ganondorf is portrayed in a painting being shown to children on Mercay Island by Oshus. 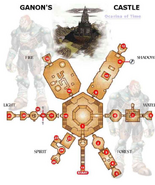 Map of Inside Ganon's Castle