Inside the Deku Tree

Inside the Deku Tree

"I have been cursed... I need you to break the curse with your wisdom and courage. Dost thou have courage enough to undertake this task?"
— Great Deku Tree

Prior to the events of Ocarina of Time, Ganondorf cast a 'death curse' upon the Great Deku Tree in order to force him to relinquish the Kokiri's Emerald. Realizing that he could not survive the curse, the tree sends his assistant Navi, a blue fairy, to find Link, knowing that only Link has the courage to challenge Ganondorf and that it was time for Link to discover his destiny. Navi locates Link and becomes his partner, but Mido refuses to grant Link access to the Great Deku Tree's Meadow, jealous of the favoritism shown towards Link. After collecting a sword and shield, Link is finally allowed to reach the tree, who explains his plight. However, he neglects to mention that he was already doomed to die from the curse. After asking Link whether he was courageous enough to help, the tree opens his mouth and allows him to enter the dungeon, which would stand as a test of his bravery.

After defeating Queen Gohma, the parasite which had been infecting the tree, Link is warped back to the meadow and rewarded with the Kokiri's Emerald that Ganondorf had wanted. The Great Deku Tree finally explains that he would soon die, despite declaring that Link had been successful. He also tells Link that he must leave the forest, venture to Hyrule Castle, and find Princess Zelda. 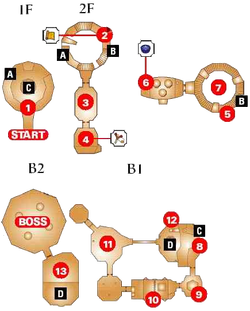 The first half of the dungeon takes place in the trunk of the Great Deku Tree. Here Link fights Skullwalltulas and Deku Babas in the "main room", and enters smaller side-rooms to find the Compass, Dungeon Map and Fairy Slingshot.

The second area is only accessible through a web in the floor of the first room. Link climbs to the top of the trunk and jumps from a ledge with a burning Deku Stick. He burns through the web covering a hole at the base of the trunk, leading to the roots. This area is heavily water-logged and contains a platform unreachable at this time. It is here that the second part of the dungeon begins. Link fights more enemies and solves more puzzles, including destroying webs with burning Deku Sticks and shooting Eye Switches with his new slingshot.

He finally re-emerges into the main root room from a different entrance, and is now on top of the highest platform. This allows him to use another burning stick to break another web, which drops him next to the boss room. Here he is challenged by the three Deku Scrub Brothers. They can only be beaten if they are attacked in a certain order, but fortunately Link had happened across a fourth brother earlier in the dungeon who had told him of this. After he beats them in the order 2-3-1, they reveal the secret weakness of their master, Queen Gohma, and Link is able to enter the boss' chamber.

In the Master Quest re-releases, several changes have been made to the dungeon, including puzzles and the order in which rooms are visited. The Fairy Slingshot is found on the top floor of the dungeon, while the Compass is found in the Fairy Slingshot's former location on the second floor. Gohma Larvae appear more frequently throughout the dungeon, there are also several enemies such as Big Deku Babas, Keese and Mad Scrubs. Several Stones of Time are also found, which Link can remove to get extra items later in the game, after he learns the "Song of Time". Link is not told the order in which the Deku Scrub Brothers must be defeated, meaning he must guess which of the three Deku Scrubs must be defeated first. Also appearing is a Business Scrub that offers to sell Link a Deku Shield for 50 Rupees.