Zeldapedia
Register
Don't have an account?
Sign In
Advertisement
in: Articles with non-canonical information, The Legend of Zelda: The Wind Waker bosses
English

Kalle Demos (カーレ・デモス, Kāre Demosu?) is the boss of the Forbidden Woods, the second dungeon in The Legend of Zelda: The Wind Waker. As with many bosses in the Legend of Zelda series, Kalle Demos seems to be the 'king' of a species of normal enemy, rather than an entirely new creature; specifically, it appears to be an elite Boko Baba.

The weak point of the boss appears to be a bright, multi-colored Boko Baba. This main part controls a much larger body, consisting of large petals which fold up to cover and protect the central Baba. The petals have long tentacles similar to Dexivines, which anchor the creature to the ceiling. This actually lifts the whole flower off the ground, holding it up even when Link severs many of the tentacles. A different set of tentacles reach down from the bottom of the plant to attack. They either cluster together above Link briefly before slamming down with brutal force, or burrow into the ground to pop out from beneath Link and attack. The tentacles sometimes pulse with a yellow energy, seemingly electricity. According to Kalle Demos' figurine, Makar is its "favorite thing", presumably to eat.

Kalle Demos bears some resemblance to the boss Barinade from The Legend of Zelda: Ocarina of Time, as both are attached to the ceiling via tendrils which must be detached using the Boomerang.

When Link enters the chamber he sees Makar, whom he has been sent to rescue, and celebrates only briefly before Kalle Demos rises up and swallows the Korok. Link then needs to fight Kalle Demos in order to rescue Makar.

As with most bosses, Link defeats Kalle Demos by using the item he obtained in the same dungeon to 'stun' it before slashing it with his sword. Link uses the Boomerang to cut the vines anchoring the plant's body to the ceiling. If Link does not do this quickly enough, the vines will regrow. Once all of them are cut at once the plant collapses, revealing the vulnerable Baba inside. There is one last line of defense, however, as the plant releases a wave of bright spores when it collapses. These do not actually affect Link but cover the game screen and disorientate the player, sometimes causing inexperienced players to run straight past the Baba.

Should Link spend too long hacking the Baba with his sword, the plant will close and damage him before spitting him out and forcing him to repeat the process, but as the damage from this is small it is quicker and easier to simply allow this to happen. The Boomerang may also be used to damage the Baba.

Interestingly, using Forest Water on the Baba will instantly kill it.

Once Kalle Demos is defeated the Baba explodes, leaving Makar and a Heart Container behind. The petals try to rise up again briefly but cannot manage, and collapse lifeless once again. A warp point appears in the center of the plant. Entering it warps Link and Makar back to the Forest Haven, where Link receives Farore's Pearl from the Great Deku Tree.

Kalle Demos returns in Ganon's Tower. Kalle Demos and the room around it are in black and white, and the only the weapons available to Link are those used in the original fight, implying the battle is some sort of flashback or manipulation of time. 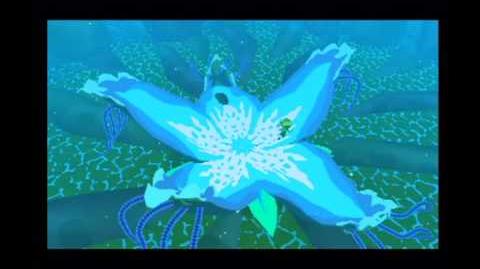 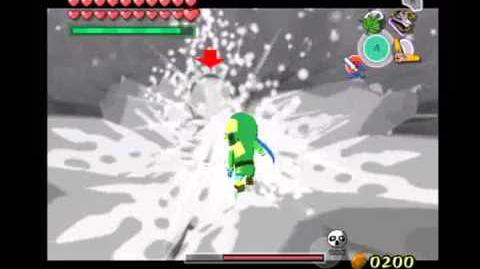 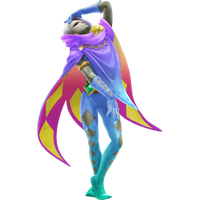 Ghirahim's unlockable Standard Outfit (Great Sea) is a Recolor based on Kalle Demos.