Zeldapedia
Register
Don't have an account?
Sign In
Advertisement
in: The Legend of Zelda: Breath of the Wild characters, Rito

"We meet again! Small kingdom! Did you see the shrine near this stable? I know quite a bit about shrines. You see, my teacher was the court poet for the Hyrulean royal family and also a member of the Sheikah tribe. He was well versed in ancient civilizations and surveyed ruins in the company of the princess, it seems. Those memories seemed to bring him a great deal of joy when he would speak of them. Anyways, I should return to my craft. I happen to know a song about the ancient hero. It was passed down to me by my teacher. Do you care to hear it?"
— Kass

Kass is a character from The Legend of Zelda: Breath of the Wild. He is a wandering Rito minstrel who will play the accordion and sing an ancient verse to Link, telling him the location of several shrines throughout Hyrule. Link can encounter Kass at certain stables where he offers to sing Link an ancient song of Ganon's defeat 10,000 years prior.

He is the student of a Sheikah who was the court poet of Royal Family of Hyrule before the Great Calamity and is traveling the land to fulfill a promise he made to his teacher who is implied to have passed away at some point in the 100 years following the Great Calamity. However, he was forced to leave his wife Amali and children in Rito Village and longs to fulfill his promise in order to return to them. Kass plays an important role in "The Champions' Ballad" DLC as he requires Link's help in completing his mentor's unfinished song "The Champions' Ballad".

As a Rito, Kass is capable of flying, an ability he presumably uses to travel across the vast expanses of Hyrule. Kass is knowledgeable of various legends told through ancient verses and knows a lot about Shrines as his teacher once accompanied Princess Zelda in surveying Shrines. As a minstrel, he is a skilled accordion player. He travels the land on a quest to play songs written by his mentor for the hero who had been defeated during the Great Calamity and practiced the songs so he might one day play them for the hero after his mentor passed away while waiting for the hero's return.

In addition to providing legends that contain clues, Kass will also sing of Ganon's defeat 10,000 years prior to the events of Breath of the Wild. While his story resembles the one told of the battle by Impa, it differs in that it a legend told through song. Kass is also shown to be knowledgeable of classic songs like "Epona's Song" which he plays at certain stables.

Kass is one of the few characters born after the Calamity capable of recognizing Link's true identity as he possesses the Picture of the Champions which Kass inherited from his mentor and gives to Link after the Hylian Champion helps Kass complete his mentor's unfinished song the "The Champions' Ballad". 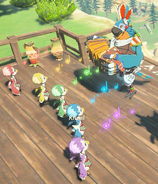 Kass with his daughters in Rito Village