Zeldapedia
Register
Don't have an account?
Sign In
Advertisement
in: The Legend of Zelda: A Link to the Past bosses

Kholdstare (シュアイズ, Shuaizu?, ShuEyes) is the boss of the Ice Palace, the fifth dungeon of the Dark World in The Legend of Zelda: A Link to the Past. It is depicted as a giant eyeball encased in protective ice. Interestingly, Frostare, a boss from from The Legend of Zelda: Four Swords Adventures, bears a striking resemblance to Kholdstare, both in appearance and name.

At the outset of the battle, Link must destroy Kholdstare's protective ice barrier, while dodging chunks of ice falling from the ceiling. The ice barrier can be destroyed by being hit with multiple blasts from the Fire Rod, or be destroyed instantly if exposed to the fire magic of the Bombos Medallion. Since executing the latter tactic drains a lesser amount of magic power from the Magic Meter, it allows for greater mileage with the Fire Rod in the battle's second phase.

After its protection is gone, Kholdstare splits into three and moves diagonally about the arena, while ice continues to fall. Link can then begin to attack Kholdstare directly, hitting each of the three monocled clouds about six times with his sword. However, using the Fire Rod causes more damage. 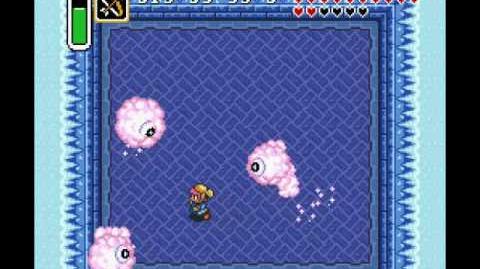 The name Kholdstare is, phonetically, a compound of the words "cold" and "stare", the former referring to the Ice Palace where Kholdstare is found and the latter being a reference to the eye. It also similar to Frostare from Four Swords Adventures.