Zeldapedia
Register
Don't have an account?
Sign In
Advertisement
in: Kikwi, The Legend of Zelda: Skyward Sword races
English

"Analysis indicates a 100% match with the Kikwis, a gentle and intelligent race of woodland creatures."
— Fi

The Kikwis are a race in The Legend of Zelda: Skyward Sword. Resembling the kiwi bird, Kikwis are herbivorous creatures that dwell in the Faron Woods. Early on in the game, Link must utilize dowsing to find hidden Kikwis, who will then impart valuable information regarding the whereabouts of Zelda. All known Kikwis seem to be named after varities of real-world tea.

Kikwi are small pear-shaped creatures, with plant bulbs on their backs. This plant bulb is a part of the Kikwi's body, and can be opened at will. Kikwi use these bulbs as camouflage. Tufts of grass or vinelike protrusions grow on Kikwi's heads, creating the appearance of hair and facial hair. A Kikwi's back also appears to develop moss with age, as shown on Yerbal. Most Kikwi appear small, about half the size of Link, with the exception of Bucha.

Due to their appearance and the similarities in the name, it is likely that the name "Kikwi" is derived from the word "kiwi", as in kiwifruit. It may also be the case that, as forest-dwellers, their name is etymologically related to Kokiri or Korok.

the kikwi may have evolved into the kokiri 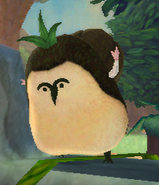 Lopsa, one of the Kikwi

Bucha, elder of the Kikwi
Español Português do Brasil
Community content is available under CC-BY-SA unless otherwise noted.
Advertisement