Zeldapedia
Register
Don't have an account?
Sign In
Advertisement
in: Articles with non-canonical information, Kings, The Legend of Zelda: Ocarina of Time bosses,
and 3 more
English

"This is a huge Dodongo that eats anything! Give it a shock, and finish it off with your sword!"
— Navi

is the boss of Dodongo's Cavern, the second dungeon in The Legend of Zelda: Ocarina of Time. King Dodongo is the leader of the Dodongo sent to the cavern by Ganondorf. This is problematic for the Gorons, as King Dodongo loves to eat them. After the defeat of King Dodongo, Darunia presents Link with the Goron's Ruby.

Interestingly, even though the size of King Dodongo is impressive, he is apparently not the largest one of his kind, as the entrance to his lair is adorned with what appears to be the skull of a Dodongo even bigger than him. There is a stone in the cavern that says, "Giant dead Dodongo... When it sees red, a new way to go will be open." This might imply that it is actually the skeleton of a long-dead Dodongo. It is still possible that this may simply be a rock shaped like a Dodongo. Also, what looks like giant Dodongo bones are found supporting the ceiling of the same room.

When King Dodongo charges up his fire attack, a Bomb or Bomb Flower can be thrown in his mouth. When the bomb explodes he becomes vulnerable to a sword attack. Link can also damage King Dodongo with Jump Attacks, Spin Attacks and Deku Sticks; utilizing these, it is possible to kill him quickly and easily. After Link has attacked him once, he gets up, curls into a ball, and rolls around the outside of the room, similar to a Goron. There are three ways to dodge his rolling. If Link uses the Hylian Shield to block King Dodongo's roll attack, stands on the downward ramp that leads into the lava, or hides in the corners next to the bomb flowers, all damage can be avoided and Link can therefore easily emerge from the fight without having taken any damage, relative to the skill level of the player. Once King Dodongo stops, he charges up his fire attack again. Once King Dodongo has taken enough damage, he is defeated. Should Link run out of Bombs, he may prevent King Dodongo from breathing fire by shooting a Deku Seed into his mouth, which will cause King Dodongo to stomp closer to the Bomb Flowers.

In the death cut-scene, King Dodongo tries to run Link over one last time, but fails and rebounds off a wall into the central pool of lava, where he remains forever trapped after the magma hardens around him. If Link returns to King Dodongo's room as an adult, he will see the skeleton of King Dodongo's skull in hardened lava. This type of death scene is later re-used (in different ways) with one boss in other games, such as Goht in The Legend of Zelda: Majora's Mask and Morpheel in The Legend of Zelda: Twilight Princess. 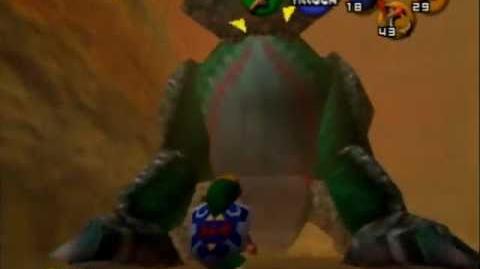 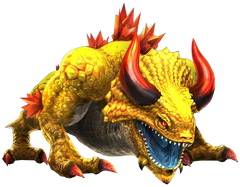 King Dodongo appears in the story and Adventure Mode as a Giant Boss in Hyrule Warriors and Hyrule Warriors Legends. It first appears being summoned by Wizzro at Hyrule Fields, to attack the Hyrulean Army. It was eventually defeated by Link, although it nonetheless held them off long enough for Wizzro to capture Hyrule Castle, forcing Princess Zelda to escape in the chaos. Its Ocarina of Time counterpart appears at the Water Temple, presumably summoned by Wizzro (disguised as Zelda) to attack Darunia and Princess Ruto while Impa and Sheik (the real Zelda) fight Wizzro. Its final appearance is as one of the enemy commanders alongside Manhandla and Gohma at the Gerudo Desert, where Ganondorf, Zant, and Ghirahim fight it and wipe it out to earn the monsters' loyalty. In Adventure Mode, King Dodongo is represented using the sprite of an 8-Bit Dodongo from The Legend of Zelda on the Adventure Map. 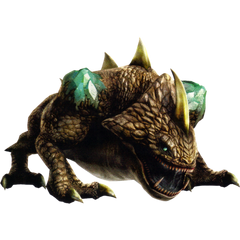 King Dodongo is fought similarly to its previous incarnations, but it has a wider repertoire of attacks, including physical strikes with its claws and a powerful roar that blasts nearby foes away. It can also breath fire and spit massive fireballs - the latter requires a long charging period, leaving the beast vulnerable to having Bombs thrown into its open mouth. If it swallows a Bomb, King Dodongo will be stunned and knocked down, leaving its Weak Point open. In the Ganon's Fury Challenge Mode, Ganon Bombs can put also put King Dodongo in a downed state. King Dodongos also drops the Fireball Boss Attack Item in Ganon's Fury.

In Linkle's Tale: The Other Hero from Hyrule Warriors Legends, the King Dodongo from the Era of the Hero of Time appears as the leader of the Monster Forces that attack Hyrule shortly after Ganon's defeat. King Dodongo's rage causes him to transform into Dark King Dodongo, granting him immunity from damage and the ability to summon powerful Gibdos and Moblins. Fortunately, the power of Linkle's Compass is able to restore King Dodongo to normal, allowing him to be defeated by Linkle and Impa.

King Dodongo is featured as a sticker. Its sticker gives a +38 bonus to flame attacks.