Zeldapedia
Register
Don't have an account?
Sign In
Advertisement
in: Articles incorporating theory, Tunics, The Legend of Zelda: Ocarina of Time items,
and 2 more
English

Kokiri Tunic (いつもの服, Itsumo no Fuku?) is an item from The Legend of Zelda: Ocarina of Time. The initial green tunic that Link is wearing at the start of the game is part of the traditional clothing of the Kokiri. The Kokiri Tunic does not possess any special abilities; nonetheless, it is the only tunic the Like Likes cannot swallow, and the only tunic that can be worn by young Link.

When Link changes into an adult after retrieving the Master Sword, the Kokiri Tunic is shown to have grown in size to accommodate that of Adult Link's, the explanation for which is never given. Interestingly, a white jumpsuit, which are worn underneath the tunic, and a pair of leather gauntlets have also been added to the adult Link's tunic. One possible explanation is that these alterations to Link's Kokiri Tunic were done by the Sage Rauru via magic while Link slept.

After being returned to the past by Zelda at the end of Ocarina of Time, young Link continues to wear his original Kokiri tunic throughout the events that follow including the events of The Legend of Zelda: Majora's Mask.

In Breath of the Wild, the armor set comprising the Cap, Tunic and Trousers of Time, refers to the Kokiri Tunic worn by adult Link. Each piece can be obtained vie the amiibo Rune. The description for the Tunic of Time reveals that its special design allows it to be worn by children and adults alike, probably referencing Link as both a child and an adult.

Link receives a bonus when wearing the entire armor set which increases the power of Sword Beams fired from the Master Sword like the other armor sets based on the Hero's Clothes. Each piece can be upgraded by Great Fairies but cannot be dyed at the Kochi Dye Shop.

Although the Kokiri Tunic resembles the clothes Link wears in previous and later games, they are not referred to as Kokiri Tunics, presumably because they aren't Kokiri based. The same tunic worn by Link in Ocarina of Time is given to the Link in The Legend of Zelda: Twilight Princess by the Light Spirit, Faron; however, it is referred to as the Hero's Clothes.

Kokiri Tunics Are Protection from the Lost Woods

Another possibility is that the Kokiri Tunic and Kokiri Boots are magical in nature (which may apply to all Kokiri Tunics or just the one worn by Link) since the Zora Tunic and Goron Tunic also have magical abilities. It could be that since Link never gets lost in the Lost Woods and becomes a Skull Kid or Stalfos unlike other Hylians, is because the Kokiri Tunic prevents him from getting lost, just as how the Zora Tunic allows him to breathe under water or Goron Tunic allows him to withstand high temperatures without dying.

Given that Link is Hylian child and would eventually grow up into an adult, it is possible that the Great Deku Tree had his clothing either created with magic or magically altered them to be able to change as Link aged, to prevent him from outgrowing them as he grew up into an adult. This ability to change may also explain how Link's clothes seem to change with him when he transforms using Masks in Majora's Mask.

In Breath of the Wild, the description for the Tunic of Time (which is Armor that is meant to represent the Kokiri Tunic) reveals that its special design allows it to fit adults and children alike, which means that it probably was indeed designed to fit Link regardless of his age, as it is unlikely that this would apply to all Kokiri Tunics as true Kokiri do not age and would have no need of such clothing. It is possible Link's Kokiri Tunic was enchanted by the Great Deku Tree so that his clothes would still fit him as he matured into adulthood. Additionally as the Great Deku Tree is wise and knowledgeable of history, he may have influenced Kokiri to wear green tunics like the ancient Hero of Skyloft as he is shown to be aware of the Master Sword's true origins in Breath of the Wild and it is known the Deku Tree Sprout inherited the Great Deku Tree's knowledge as he knew about Link's adoption and true nature thus it stands to reason the Great Deku Tree possessed this knowledge as far back as Ocarina of Time passed down through his incarnations. 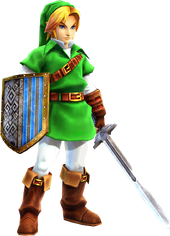 The Cap of Time from Breath of the Wild

The Tunic of Time from Breath of the Wild

The Trousers of Time from Breath of the Wild