Zeldapedia
Register
Don't have an account?
Sign In
Advertisement
in: The Legend of Zelda: Skyward Sword bosses
English

"Koloktos: A guardian who protects the Ancient Cistern. While he appears to be an incredible marvel of ancient art, inside he brims with dark energy which brings him to life."
— Hyrule Historia

Koloktos, Ancient Automaton (魔蝕神器ダ・イルオーマ, Mashoku Shinki Da Iruōma?, Evil Defected Spirit Vessel: Da Iruoma), is the boss of the Ancient Cistern, the fourth dungeon in The Legend of Zelda: Skyward Sword. It is a huge golden statue with six arms, two of which hold large Chakram-style curved axes. Koloktos is initially inanimate, but when Link faces it he finds Ghirahim sitting on the statue's head. After stating that Link is persistent, Ghirahim promptly uses his dark magic to bring it to life before vanishing. The statue will often smash its fists down on top of Link in an attempt to crush him, and the hero must use the Whip in order to defeat it. The pieces which make up Koloktos are held together by some form of dark energy provided by Ghirahim.

In the first part of the battle, Koloktos remains in the center of the room. It attacks by swinging the curved axes in its upper arms, throwing them at Link, and smashing its fists on its mid and lower arms down on top of him. When it smashes its fists down, Link must dodge and use the Whip to remove the joints connecting its arms. If the boss hits Link with these hand attacks it will recover quickly, whereas if it misses its hands will become stuck in the floor. Once Link has detached four of its arms, he can attack the boss' vulnerable chest core. Alternately, if two of Koloktos's arms are removed, Link can get close to it and wait until it raises its arms to deliver attacks.

After repeating the strategy a few times, the boss reattaches its arms, then pulls itself up to reveal a pair of legs while encasing its heart with a protective grate and brandishing six Massive Swords. The boss now attacks by slamming its swords down on Link, chasing after him while wildly slashing its swords, and occasionally summoning Cursed Bokoblins to assist it. To defeat the statue, Link must dodge the statue's vertical slash, then detach one or all of the arms on one side with the Whip. When Koloktos has lost at least one arm, the Whip attachment points on the other arms are kept within their forearm pieces, preventing further use of the Whip and mandating use of a Massive Sword to detach any further arms. If Link detaches all six arms but not the legs, Koloktos will attempt to charge at him. If Link dodges the charge, Koloktos will slam into the wall, stunning itself.

Once an arm has been detached, Link will be able to pick up the Massive Sword the arm was holding. Link can use this sword to detach the statue's legs. Once the legs are detached, Koloktos is crippled and will flail in place briefly, giving Link an opening to destroy the protective casing on its chest with a Massive Sword, and attack the heart within.

Koloktos will reform all of its appendages after taking damage, and Link must repeat his attack pattern about three times. After that, Koloktos freezes, then falls apart as the dark magic which held it together is destroyed, revealing a Heart Container. 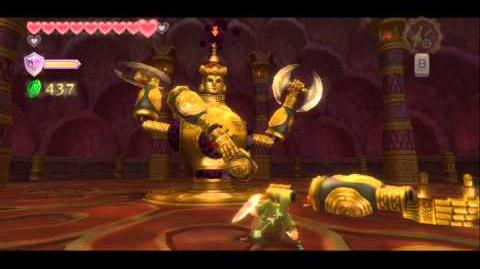 Koloktos was most likely inspired by the Asura; six armed, three headed (or three faced in some versions) demon deities from Buddhism. This would fit within the Buddhist theme of the Ancient Cistern. The game files for the boss use the name "Asura".