"Look at that stupid kid! He came on his own to offer himself as a sacrifice to the great Ganondorf..."
— Kotake

Koume (コウメ, Koume?) and Kotake (コタケ, Kotake?) are recurring characters in the Legend of Zelda series. They are the surrogate mothers of the Gerudo King, Ganondorf, and loyal to his cause. In the parallel world of Termina in The Legend of Zelda: Majora's Mask they are friendly characters, as opposed to being antagonists. Koume, the red, has power over fire, while Kotake, the blue, has power over ice.

Koume and Kotake are first seen chasing Nabooru from the Spirit Temple, whom they capture before retreating back inside. When Link returns as an adult seven years later, it is revealed that they used Nabooru as a personal Iron Knuckle guard, having brainwashed her to serve their son. Upon revealing Nabooru, they teleport her to places unknown before taunting Link and retreating to their boss chamber.

After their defeat, Koume and Kotake die, as halos appear above their heads. They bicker about who is the younger sister as they fade away into a shining light. However, they swear they will return to haunt Link. Interestingly, in this last sentence, they use the term "I" instead of "we." This could mean only one is saying it, that they really are only one person able to split in two, or that they could both be saying it in unison. In the Nintendo 3DS remake, they instead use the term "we".

Koume and Kotake are mentioned afterwards by the Carpenters, who state that subsequent to their death, the Gerudo are not "scary anymore." This seems to imply that the reason as to why the Gerudo were previously threatening to be dangerous was the influence of Koume and Kotake.

Koume and Kotake reside in the Southern Swamp, operating the Magic Hags' Potion Shop and Old Koume's Boat Cruise at the Swamp Tourist Center. At one point, Link finds Koume immobilized after an attack by the Skull Kid in the Woods of Mystery. Upon hearing of this, Kotake gives Link a bottle full of Red Potion to help Koume. This restores her energy, and she goes back to her job as the manager of the Swamp Boat Cruise, offering Link a cruise free of charge.

Kotake will only sell potions to Link in Hylian form, although she dismisses his other forms in a polite and apologetic way. She believes her potions will only work on humans, though in practice they have the same effect no matter what form Link is in. If Link gives Kotake a Magic Mushroom, she will use it to make Blue Potion. She will then fill one of Link's bottles with it for free, and buy any additional Magic Mushrooms for 20 Rupees each. 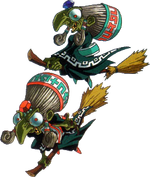 In the first regular game in a Linked Game session, Koume and Kotake first appear in the guise of an elderly woman to dissuade Link from pursuing his quests against Veran or Onox, depending on who Link tackles first. They once again appear before the final confrontation with that villain, revealing themselves to be in fact Koume and Kotake before flying off once again. After defeating Onox or Veran, it is revealed that he/she lit their corresponding Flame of the Dark Rites, which is needed to revive Twinrova's surrogate son, Ganon. Veran's sowing of misery lights the Flame of Sorrow, while Onox's rampage lights the Flame of Destruction.

It is revealed that the Twinrova were in fact using Veran and Onox as pawns in an attempt to light these flames and resurrect Ganon. To light the final flame, the Flame of Despair, they kidnapped Princess Zelda, who serves as a source of hope for the people. With all three flames lit, the Twinrova attempt to sacrifice Zelda, the final step to resurrecting Ganon, but Link intervenes and defeats the witches. Desperate, they sacrifice themselves as a replacement for Zelda, but since they were not pure of heart, Ganon is revived as a mindless, raging monster rather than his old, cunning self.

"Koume and Kotake are twins who can merge to form Twinrova. They have about 800 years between them, but as Twinrova they appear young and alluring. It is best to remember that Twinrova possesses the magical powers of both sisters, making her a very dangerous foe, even to herself..."
— Trophy Description

Koume and Kotake appear as stage hazards on the Gerudo Valley stage, where they will both appear and one of them will attack the stage damaging nearby combatants with their magic: Koume with fire magic and Kotake with ice magic. Their fused form Twinrova from Ocarina of Time 3D appears as a Trophy.

The Legend of Zelda: Ocarina of Time (manga)

Twinrova first appeared in the chapter "Shadow Guide:Shiek", where they convince Ganondorf to allow them to brainwash Ingo so they could lure Link into the open (as Ganondorf initially planned to have Ingo executed for his failure to keep Epona around long enough for Ganondorf to acquire her). The manga also makes the game's implication that Twinrova was responsible for the Gerudo's hostile actions in the Adult timeline more explicit where it was revealed that they had directly brainwashed the tribe via the jewelry on their foreheads. Afterwards, they confronted Shiek over "his" treachery (as he initially seemed to attack Link, only for him to save Link), although Link managed to kill them with their own magic via the Mirror Shield, which had been supplied to him via a recently-defected Nabooru.

Retrieved from "https://zelda-archive.fandom.com/wiki/Koume_and_Kotake?oldid=528310"
Community content is available under CC-BY-SA unless otherwise noted.