"This mutinous robot stole this ship from Skipper long ago. He still commands the ship today. When fighting in a narrow space like this, it is more effective to use thrust attacks with your sword than to try to swing your sword widely."
— Fi

LD-002G Scervo, also known simply as Scervo, is a mini-boss from The Legend of Zelda: Skyward Sword. He is a formidable warrior encountered on the Sandship in the Lanayru Sand Sea. Wielding an over-sized hook and two electrified swords, Scervo stole the Sandship from LD-301N Skipper some time in the past.

After Link finds the first Small Key on the Sandship, he can take it to the locked door on the first floor and make his way outside the ship once more. When he steps onto the plank of the ship, a spiked gate activates behind him, forbidding exit and causing damage when touched. Scervo will then appear at the edge of the plank. In order to defeat Scervo, Link must knock the robot back with enough successful sword strikes until it almost falls off the plank. When Scervo is on the edge, he will drop his sword and make the spiked gate move forward, reducing the length of the plank to 75% and giving Link less room for error. Some of Scervo's attacks can countered with a timely Shield Bash. He then pulls out a second sword, Link jumps back to his starting point and the process repeats, with Scervo attacking and defending himself more often. After the second time, Scervo's right arm will break, dropping his sword in the process while simultaneously enraging him. The spiked gate moves forward once again. For the third and final phase, Scervo uses his hook with wide swings that can rotate his torso for combination attacks, which compromises his defense but gives him a more forceful attack with which to shove Link back. After repeating the process a third time, the hook breaks and Scervo will fall off the plank, exploding. After Scervo's defeat, Link is rewarded with the Bow. 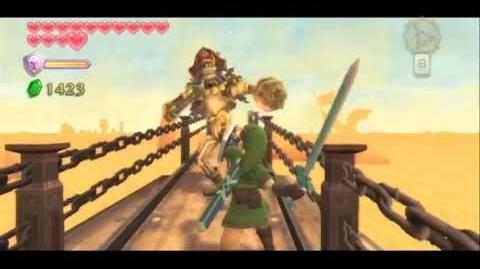 His name seems to be a portmanteau of the words scurvy, a disease that plagued many sailors and pirates due to a lack of fresh fruit on the high seas, and servo, short for servomechanism, a part used in mechanical devices.