Zeldapedia
Register
Don't have an account?
Sign In
Advertisement
in: Ancient Robots, The Legend of Zelda: Skyward Sword mini-bosses

"This menacing robot guards Sky Keep. It is thought to be of a similar model to the robot that stole Skipper's ship in Lanayru Sand Sea."
— Fi

LD-003K Dreadfuse, also known simply as Dreadfuse, is a mini-boss from The Legend of Zelda: Skyward Sword. He is an Ancient Robot guarding the Sky Keep. Dreadfuse appears to be of a similar model to LD-002G Scervo, the only difference being that Dreadfuse has a crown, while Scervo has a captain's hat similar to that of Skipper's.

The battle with LD-003K Dreadfuse is almost identical to that of Scervo. Initially, Link and Dreadfuse are on a narrow plank and Link must attempt to knock him off. After Link has attempted to knock Dreadfuse off twice, his sword arm will break, forcing him to use only his hook. Upon defeat, Dreadfuse will fall off the platform and explode. 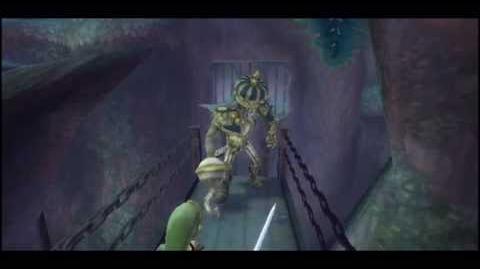 Dreadfuse is likely a portmanteau of the words "dread" meaning a deep sense of fear and "fuse", an electrical component.