"An enemy that eats shields and certain clothes. Beat it quickly to get your gear back!"
— Navi

Like Likes (ライクライク, Raiku Raiku?) are recurring enemies in the Legend of Zelda series. They are cylindrical monsters with the ability to suck in creatures the size of a human and consume items that their prey carries. Most shields or tunics Link is wearing will be devoured, though they will, for the most part, leave the devoured item if killed shortly after eating it. Like Likes are generally yellowish in color and dissolve into a puddle when killed; some come in different colors, and sometimes they simply disappear when killed. Typically, they are unable to swallow the strongest shield available to Link in a game.

Like Likes make their first appearance. If Link is swallowed by one and if Link is unable to quickly defeat it, the Like Like will eat his Magical Shield.

Like Likes appear only in the Game Boy Advance port of the game. One can be found outside the shield shop in the Dark World, directly west of the Pyramid, and another in a room of the Palace of the Four Sword. Like Likes will eat Link's shield if he is swallowed by one. If Link does not defeat a Like Like that has stolen his shield quickly enough, the Like Like will escape with the shield. Unlike in other games, it can eat the Mirror Shield. If the creature manages to flee with its stolen prize, the shield becomes available at the shield shop, where the Fighter's Shield and Red Shield can also be purchased.

Similar enemies called Pikits appear in both versions of the game and share the same Japanese name as Like Likes.

Like Likes appear mostly in the northern areas of Koholint Island. Like Likes can swallow Link's Standard Shield and if eaten, it cannot be regained, forcing Link to obtain another shield. Like Likes cannot swallow the Mirror Shield, however.

Like Likes are only vulnerable to sword strikes and arrows while they are not leaning forward in an attempt to swallow Link; however, Link can damage them with bombs regardless of whether or not one has swallowed him. Like Likes can be killed in a single hit with a Fire Arrow or Din's Fire.

In addition to eating Link's shields, Like Likes will also eat the currently equipped tunic. An easy way to avoid this is to equip the Mirror Shield and Kokiri Tunic, both of which cannot be eaten by Like Likes, as it is impossible to obtain another of either items. Like Likes commonly appear in areas associated with the dead, such as the Bottom of the Well and the Shadow Temple, however, they also appear in areas like the Fire Temple, Water Temple and the Spirit Temple. In Master Quest, Like Likes appear as early as Inside Jabu-Jabu's Belly.

Like Likes have the same appearance as in Ocarina of Time, but function slightly differently. They can devour the Hero's Shield when Link is in his Hylian form, but cannot take his Mirror Shield. If Link is devoured in his Zora form, he can easily damage and escape from the Like Like by activating his bio-electric shield, though he will still take damage as he is spat out. Like Likes most commonly appear in the Great Bay region, particularly in underwater areas. There are small and large Like Likes, the larger variety taking more hits to defeat.

Like Likes will move towards Link even if he is wearing the Stone Mask, but will not try to swallow him, and therefore can't damage him. When Link is spat out by a Like Like, he will fly further in lighter forms (Deku Link) and less distance in heavier ones (Goron Link). Like many enemies, they will drop a Purple Rupee if hit with a Light Arrow.

Like Likes have the same appearance and function in both Oracle games; if Link gets eaten by one, it will eat his shield, regardless of whether or not he has one equipped. Furthermore, Like Likes do no damage to Link. A devoured shield is gone permanently, and a new shield can be purchased in the main cities' shops.

In Oracle of Seasons, the southernmost area of the Lost Woods spawns an infinite amount of Like Likes by dropping them from the air. This provides an excellent way to induce Maple meetings or simply to restock on items.

Like Likes have the same function in this game as in past installments. Also, there are Rupee Likes, which eat different amounts of Rupees depending on the type of the Like Like.

Like Likes, as well as Rupee Likes, are commonly found in many islands. Like Likes can inhale in an attempt to swallow Link, and can eat his shield as well. To eat his shield, a Like Like has to have ingested Link for several seconds, but Link can escape by quickly rubbing the touch screen on the Nintendo DS.

Like Likes act similar to past counterparts, as they will swallow Link if he gets too close. In this installment, however, Like Likes can hide in various pots and disguise themselves as Treasure Chests waiting for their prey to approach. Shattering the container in question from afar will reveal the Like Like before it can attack. Like Likes will eat the Shield, but not the Shield of Antiquity.

Like Likes, along with Rupee Likes, appear in Lorule near the Vacant House. They can eat the Shield upon capturing Link, rendering it irretrievable and a new one must be bought. However, they cannot devour the Hylian Shield.

A new type of Like Like called, Life Likes (which like Rupee Likes have a angler fish like antenna) appear as enemies in Tri Force Heroes and conceal themselves by pretending to be Hearts, grabbing Link when he tries to retrieve them drain his hearts. However they can easily be killed by throwing a Bomb at them, which they will swallow, killing them. Apparently due to Link's lack of a shield in Tri Force Heroes, normal Like Likes do not appear.

Like Likes appear as enemies. They can be found in the Underground Maze during Adventure Mode or in Melee Mode where they will very rarely appear in crates and barrels. The Like Like trophy denotes that Like Likes beat out Wallmasters as the most annoying enemies in the Legend of Zelda series.

"These tube-shaped monsters have been in almost every Legend of Zelda game since the very beginning, and they've developed quite a taste for Link in that time. They'll even take his shield and clothes! You get them back nowadays, but when Like Likes first appeared, if you didn't take Link's Magical Shield back quickly, they'd consume it!"
— Trophy Description

The Like Likes from Ocarina of Time 3D appears as a Trophy.

The origins of the name "Like Like" may be suggested in a Hylian proverb, which states, "Shield eaters and world leaders have many likes alike."  In the Japanese version, the name is from the Japanese proverb "蓼食う虫も好き好き", which roughly means "each have their own favorites." Specifically, it referenced water striders' diets on water peppers.

It should also be noted that in the Twilight Princess guidebook, it is mentioned that "Like" is the Hylian term for "eat". This would mean that "Like-Like" translates into "Eat-Eat". 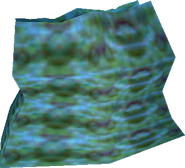