"The name's Linebeck! I'm a real man of the sea. Impressive, huh?"
— Linebeck

Linebeck (ラインバック, Rainbakku?) is a character from The Legend of Zelda: Phantom Hourglass. He was initially a self-centered, greedy, arrogant, cowardly, treasure-pursuing sailor. He named his ship after himself, the S.S. Linebeck. He plays a huge role in Link's adventure, mainly by providing the services of his steamship.

While he at first sight, appears to be a wholly self-absorbed individual with his mind solely on profit, Linebeck more than once displays acts of loyalty and courage. Prior to the events of the game, Linebeck was somehow involved with Jolene. Apparently, Linebeck got on her bad side by stealing some of her treasure and she since held a vendetta against him. Linebeck assists Link with information about an island when talked to. Whenever Link docks the ship at an island, Linebeck makes up an excuse in order to remain with the ship, such as saying he has to "wash the rudder." His personality changes as he helps Link through his quest, becoming braver and more courageous.

Linebeck's grandson, Linebeck III, who has inherited both his grandfather's appearance and demeanor, appears in The Legend of Zelda: Spirit Tracks. Before he died, Linebeck hid away a Regal Ring in the Trading Post, with the instructions written in a letter, which he passed onto his grandson. Linebeck's grave is located at the Trading Post, near the location of the Regal Ring. It is notable that Linebeck is one of the few characters to have been confirmed as dead in a sequel with most other characters merely being mentioned or not even being mentioned at all.

Link first encounters Linebeck inside the Temple of the Ocean King on Mercay Island. Linebeck is stuck inside one of the temple's traps. Link completes the puzzle in the room, allowing Linebeck to exit. He does so without any acknowledgement of Link. He decides that the treasure inside the temple is not worth the risk, and travels south to the Shipyard. Eventually, Link and Ciela catch up with Linebeck, and while he is initially reluctant to team up with the two and travel the World of the Ocean King in search of the Ghost Ship, Ciela makes mention of a huge treasure; too rich an opportunity for Linebeck to pass up. He agrees to let Link become a part of his crew, and together they depart, sailing the seas in search of the fabled ship, with Linebeck's mind ever on the treasures found therein. At first, Linebeck seems to be quite annoyed by Ciela, calling her "Sparkles," and arguing with her constantly. He also acted rather harsh towards Link at times, fueling Ciela's rage.

Eventually, they find the Ghost Ship; however, Tetra, Link's friend who had been spirited away by the ship, has been petrified. Linebeck quickly readies to abandon their quest; outraged at the lack of treasure to be found. However, his "loyalties" instantly return when Oshus promised the captain one wish in return for his continued aid. The more they journey together, it becomes apparent that Linebeck gradually begins to see Link and Ciela as his friends. During the final battle, Linebeck displays uncharacteristic bravery by confronting Bellum when Link is rendered unable to battle it. Bellum attaches itself to Linebeck, becoming a being known as Bellumbeck. Link defeats Bellum one final time, expelling the evil creature from Linebeck and dispatching it from the World of the Ocean King. Despite it not truly being his fault, Linebeck seemed ashamed for letting Bellum control himself. Link and Ciela understand though, with the latter reassuring Linebeck and pointing out his heroics.

However, the S.S. Linebeck is destroyed during this final battle with Oshus seemingly killed as well. This caused Linebeck and Ciela to mourn their losses. They then suddenly hear a noise when a giant strange creature appeared from the water. The creature revealed itself to be Oshus, now in his true form. He then thanked Link, Linebeck and Ciela for everything they did. When Oshus asked for Linebeck's wish, it seemed that Linebeck had actually forgotten about it. When Ciela asked if it's treasure he wishes for, Linebeck blatantly denies it. He then states his one wish, one he had sworn to use to obtain unimaginable wealth, to fix his boat. When Ciela is surprised by Linebeck's wish and asks if it is what he really wants, it ends up with Linebeck comically attacking her. Oshus then states their time to return to their own world is near, surprising everyone. The three spirits state their goodbyes to Linebeck and Link, with Ciela stating her's last. Ciela first says goodbye to Linebeck, telling him how relieved she is at not having to see him again. Linebeck replies in a similarly unpleasant manner, turning away, but Ciela seems to drop it and sadly says goodbye in a serious manner. Linebeck does not reply, but turns back after she leaves, a regretful look on his face. Ciela then says goodbye to Link, as a dense mist covers the Ghost Ship.

Afterward, when Link and Tetra awaken at their ship with everything seemingly a dream, Link finds an hourglass in his pocket. This is followed by him finding Linebeck's ship in the distance, now fixed. This causes Link to smile in joy. It turns out the adventure really did happen.

It seems Linebeck's cowardice vanished and he gains a reputation of being a legendary captain, proven by the description on his grave in Spirit Tracks. It was also shown that he went to New Hyrule at some point, which is seemingly the place where he died. Before he died, he left behind a Regal Ring he had obtained presumably during his seafaring days and wrote a letter to his grandson Linebeck III instructing him on how to find it. However his grandson is unable to decipher the clues Linebeck left behind and instead it is found by Spirit Tracks incarnation of Link for Linebeck III. However the Bridge Worker later takes the ring as payment for fixing the rail bridge near Linebeck Trading leading to the Ocean Realm.

"Treasure time! Have you heard of the legendary sailor who got all the loot he ever wanted? Now you can too!"
— Linebeck's Uniform catalog description

Though Linebeck himself does not appear, Link can have Madam Couture create Linebeck's Uniform an outfit based on Linebeck's clothes from Phantom Hourglass. Linebeck's Uniform allows Link to peek into unopened Treasure Chests. In the uniform's in-game description he is described as a legendary sailor who got all the loot he ever wanted, indicating the legend of his exploits has reached the kingdom of Hytopia.

Linebeck meets Link the same way as in the game; in the manga, however, he makes Link do all the cleaning and tidying on his boat.

Linebeck was originally a member of a pirate crew that was on the Ghost Ship. They were receiving treasures from a mysterious girl as a thanks for helping her out, but the treasure (and the entire ship) turns out to be cursed. As the crew members began to have their life-forces drained, and their flesh rotting off their bones, Linebeck took the only boat and escaped with his life, while the rest of the crew died cursing his cowardice.

Sometime in the past, he had also offended Jolene by stealing her treasure (a piece of squid jerky), which he eventually returned when she caught up with him during his adventures with Link, but it turns out that she merely wanted an apology. As he gave it to her, Linebeck was suddenly kidnapped by Bellum.

Linebeck is featured as a sticker. His sticker gives a +20 bonus to throwing attacks, and can only be applied to Link, Toon Link, Zelda, and Ganondorf.

"A sailor who hunts for the Ghost Ship and its fabled treasure. Islanders speak of him with admiration, but he is more often cowardly and stingy. And he can't even swim! Despite this, he joins Link's ocean venture and finally finds his courage when it's really needed!"
— Trophy Description

Linebeck appears as a Trophy. 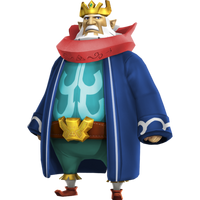 Though Linebeck himself doesn't appear in Hyrule Warriors Legends, he is referenced by King Daphnes Standard Outfit (Grand Travels) which is a Recolor of his Standard Outfit based off Linebeck.

In addition to the recolor, two pieces of Fairy Clothing are based on Linebeck's Uniform: the Captain's Jacket and Captain's Trousers.

It is never made clear whether Linebeck comes from the World of the Ocean King or the same world as Link. Although Link first meets him in the World of the Ocean King and he has somewhat of a history there (as indicated by the people on Mercay Island and Jolene), at the end of the game he and his ship are sent back to the Great Sea along with Link and Tetra. It is also noted that when near the end of the game, when the Ocean King, in his whale form, tells that they are in a different world, it is clear that Linebeck appears surprised to hear the statement, suggesting that he is from Link's world. However, this is contradicted by his relationship with Jolene, as she appears to be from the World of the Ocean King. It could be that he is from Link's world, but arrived in the Ocean King's world a long time before Link did. He eventually returned to Link's world, as shown when Link spots his ship after he returns along with his grave found in New Hyrule in the sequel and the fact that his grandson Linebeck III lives in New Hyrule and is implied to be native to Link's world. 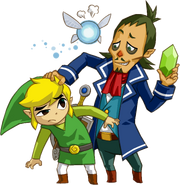