"Mikau! You came back safely! That's good... I was surprised when my voice turned that lonely island into a turtle... but that song you played for me... my mother used to sing it often... long ago..."
— Lulu

Lulu is a character from The Legend of Zelda: Majora's Mask. Lulu is a descendant of a Zora tribe who has been protecting Great Bay Temple for ages. She is the current vocalist of the popular all-Zora band, The Indigo-Go's. Her mother, who was also named Lulu, was the vocalist of The Indigo-Go's in the previous generation. 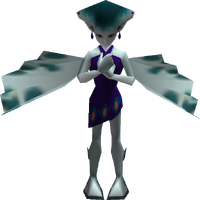 Prior to the events of the game, Lulu gave birth to seven Zora Eggs. At about the same time the waters of the Great Bay became warm and murky, Lulu mysteriously lost her voice, preventing her from speaking or singing. Not wanting her lover, Mikau, to find out about the loss of her voice, she came to Evan, the bandleader, for advice. He advised her to bring the eggs to the Marine Research Lab, that they may be kept in the clean, controlled water found there.

A day later, Lulu was awakened from her sleep by noises, finding her room invaded by Gerudo Pirates. They had come to steal Lulu's eggs, after being falsely informed by the Skull Kid that the eggs were clues to bypassing the great dragon cloud enveloping Great Bay Temple, which ostensibly held a great treasure. Lulu attempted to fight back, but ultimately, the pirates managed to steal all seven eggs. Lulu lost consciousness, and the pirates left Zora Hall with her eggs, planning to bring them to their fortress; however, on the way, some of the eggs were lost near Pinnacle Rock. The next day, Lulu finally told Mikau everything that had occurred; according to Lulu's diary, Mikau's response made her feel that all hope had been lost, and she worries he will do something rash. Mikau later attempted to retrieve the eggs from the pirates; however, his mission failed, and he was mortally wounded.

The hero Link encounters the wounded Mikau in the shallows of Great Bay Coast and brings him safely to land; Mikau, with the last of his strength, performs his final song, in which he tells Link of what has transpired. With Mikau dying, Link plays the "Song of Healing", healing Mikau's pain and allowing him to pass on, sealing his spirit inside a mask of his likeness. Mikau's ghost then appears and informs Link on how to control his Zora form; after disappearing, Link buries Mikau and uses his guitar for a marker. In Zora form, Link arrives at Zora Hall to find the place in turmoil, and pieces together the events which occurred. Link successfully infiltrates the Pirates' Fortress and retrieves the eggs which were kept there. With the aid of a Seahorse, Link manages to make his way through the murky waters to Pinnacle Rock, defeating the Deep Pythons guarding the remaining three eggs.

Transporting the eggs in bottles, Link is able to gather all seven in the Marine Research Lab, placing them in the special temperature controlled water tank there. After all seven eggs have been gathered, they hatch simultaneously; the Zora hatchlings promptly align themselves with the walls of the tank, bearing the resemblance of notes on a staff. Using the Guitar of Waves in Zora form, Link learns the song, the "New Wave Bossa Nova", from the hatchlings. Link returns to Zora Cape and plays Lulu this song; Lulu recognizes the melody, as her mother had sung it long ago. Her voice restored, she sings along with Link's guitar playing. Lulu's singing awakens the Giant Turtle, the silent watcher of the Great Bay, who had been masquerading as a small islet. The ancient creature tells Link that time is precious, and that Great Bay Temple holds the key to cleansing the ocean and restoring peace. Link uses the Hookshot to transport himself on top of the turtle, and they set sail for the temple, leaving Lulu confused.

After Link braves the trials of Great Bay Temple and defeats Gyorg, the water temperature is returned to normal. Link can then return to Zora Hall and find The Indigo-Go's' rehearsal ready to get underway thanks to Lulu's restored voice. Lulu is waiting for Mikau, however, so Link must speak with her while wearing the Zora Mask for the rehearsal to begin. Once Lulu happily gives the cue, Link and the The Indigo-Go's rehearse their performance for the upcoming Carnival of Time. During the end credits of the game, The Indigo-Go's are seen performing the full version of this song, which is based on the Jam Session, which Link had taught Evan earlier.

Lulu is stated to have a mother who was the lead singer of The Indigo-Go's in their prior generation; she fittingly is also named Lulu. Also, Gorman reveals that it was her hit, the "Ballad of the Wind Fish", that inspired him to join show business.

"Oh, yeah, that's right. There aren't any secrets between you and Lulu."
— Tijo

It is shown in Mikau's "Song of Healing" cutscene that he and Lulu were in love. They lock gazes, a smile on her face, before she turns her head to the darkness as the other band members appear. Mikau does not take his eyes off her during this time. He then pulls out his guitar and looks at it, signifying that they are all about to perform. Lulu then looks back at him, as he also looks back at her. Mikau holds out his hand, she happily takes it, and together they walk to the rest of the band.

Other facts that imply a romantic relationship between them are some of the comments made by Tijo, the band's drummer and Mikau's roommate. He talks about Mikau and Lulu's closeness. Other things that can be noticed are the Zoras that inhabit Zora Hall, who are jealous of Mikau for being able to spend so much time with Lulu, and knowing a side of her that they do not - her private side. The Zora that is trying to spy on Lulu through her dressing room door's keyhole is frightened and nervous when he is "caught" by Link when in Zora form, implying that Mikau was protective of Lulu, and may have confronted this Zora before about trying to spy on Lulu. This Zora will run away after trying to squirm out of the situation.

While Lulu's Zora Eggs may cause controversy, they do hatch and become children, showing that they were indeed fertilized. Since the Zora were known to have both a mother and a father, it is only customary to assume that there is a father of Lulu's children. The only logical solvent of this would be Mikau, since he is already Lulu's implied lover. The biggest clues about Lulu's eggs can be found in Lulu's diary, and Mikau's determination to recover the eggs.

Though it is often believed that Mikau is the father of the eggs, it is also possible that they were created as a result of some kind of magic, and lack an actual father. Lulu is apparently a protector of Great Bay Temple, and as a result the eggs may have been created by magic in order to begin the chain of events necessary for the liberation of the temple. Though the origin of the eggs could potentially be explained by their implied magical properties, this does not preclude the possibility that Mikau is also their biological father. 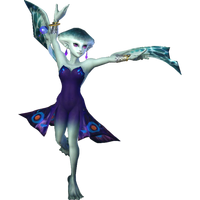 Though Lulu herself does not appear, Princess Ruto has a recolor of her standard outfit based on Lulu as an unlockable alternate outfit. Though it appears that Ruto is wearing Lulu's dress, the dress portion is actually body paint and Ruto has Lulu's skin tone.